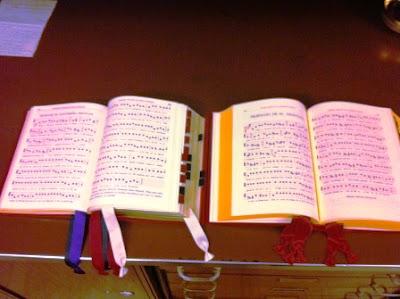 Now that we have the new translation of the English Missal it is perhaps easier for us to begin to take an objective look at the 'mutual enrichment' which the Holy Father calls the Church to address; the Tridentine Missal shedding light on the Novus Ordo Missal, and how the new Missal sheds light on the old. There will be many, more able than I, who will be able to lead an objective and genuine enquiry concerning the mutual enrichment of the two forms of the Roman Rite, a process which will bring about the emergence of one single form of the Roman Rite. In any case, it is time which will allow an organic process of genuine reform of the Liturgy to take place. Nonetheless, there are a number of simple ways in which I already see the possibility for mutual enrichment by the two missals.
1. Ways in which the Tridentine Missal can enrich the Novus Ordo Missal:
The greatness of the Offertory Prayers of the Old Missal suggest that the Offertory Prayers of the New Missal could be enriched.
The Old Missal carries the text of the Offertory Antiphon, whereas the New Missal, whilst situating this antiphon in the rubrics, fails to give the text of the Antiphon.
The Liturgy for Ember and Rogation Days still remains to be included in the New Missal; the Tridentine Missal is the objective point of reference for this Liturgy.
The title given to and the sense of the two periods which are now called, in a banal way, 'Ordinary Time'. The Weeks after Christmas and before Lent have a very different sense to those which follow Pentecost. These two periods of the Liturgical Year have a richer sense in the Tridentine Missal.
2. Ways in which the New Missal can enrich the Tridentine Missal:
The development of the Lectionary.
The greater number of Prefaces.
The way in which the Church and the relationships within the Church are better expressed by the New Missal.
The greater variety of 'Masses for various occasions'.
Finally, a word about the Orientation of the priest at the altar. Since the rubrics of the Novus Ordo Missal presuppose that the priest faces east when he stands at the altar, the question of orientation is clearly one which in some sense, in flux. However, the weight of the Tradition obvioulsy falls on the east-facing orientation. I hope that in this process of Liturgical reform which is newly beginning, that the form of the Eucharistic part of the Mass will be appropriately enhanced - the moment when we can participate in that Eternal Return which Christ makes to His Father.
Posted by Fr Richard Aladics at 13:29 No comments:

The proclamation of Christmas 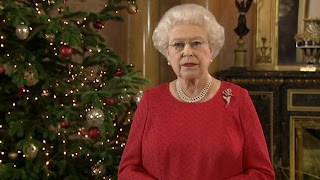 Christmas Day on British television again gave us the contemporary secular haze and again it was only the Her Majesty the Queen who spoke about the love of God revealed in Christ at His birth in her Christmas Day message. Her Christmas message this year was a proclamation of the true meaning of Christmas.
That she stands alone on British television in speaking about Christ reveals just how far we have gone in attempting to dismantle Christian civilisation, and how blessed is the Church of England to have her as its head.
Posted by Fr Richard Aladics at 19:53 No comments: