More light on the new era which is just beginning. 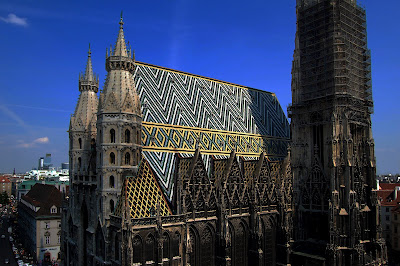 As usual I am a little late in responding to things I see and hear. This article appeared in Zenit last August and I place a link to it here. It is an address given by Otto Neubauer, the leader of the Emmanual Community in Vienna, to the Holy Father and participants in a Symposium on the New Evangelisation last August at Castel Gandolfo.
The speaker is, in my understanding, quite visionary, and does not make light of the New Evangelisation but shows it to be something which is very simple yet very great. What do you think of his address? I would be glad to hear.
Posted by Fr Richard Aladics at 08:37 No comments: 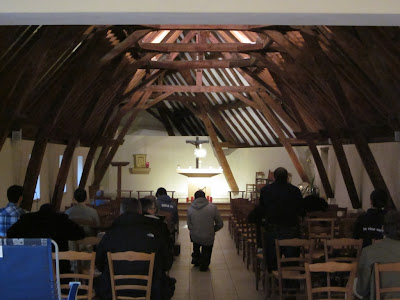 I couldn't help uploading yet another image from our time of Adoration in St John's chapel at Paray-le-Monial, in France. A similar image from a number of years ago heads this blog. In December I was back in the UK and took part in another pilgrimage for young men to Ars and Paray-le-Monial. I think that this is the fourth such pilgrimage that we have organised, an itinerary which is focussed on vocational discernment for young men.
Each year we stay at the house of the Societe Jean Marie Vianney in Ars for a few nights, and we make a day pilgrimage to Paray, where St Margaret Mary received the apparitions of the Sacred Heart of Jesus in the mid sixteen hundreds. The chapel of St John is next to the Basilica of the Sacred Heart; it is in the mother house of the Emmanuel Community, and this lovely upstairs chapel is given over to perpetual Adoration of the Eucharistic presence of Jesus. Speaking from experience; the Holy Hours which we have made there are very powerful.
Posted by Fr Richard Aladics at 05:02 No comments: 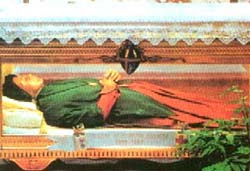 I am so glad, now that Josephine Bakhita has been canonised, that her feast day should coincide with my birthday. I ask regularly for her intercession for we who live in this age.
I only came to know about her when she was made a canonised saint by JPII in the year 2000. But when the present Holy Father spoke at such length about her in his second Encyclical Letter (Spe Salvi) I came to realise much more her significance for our age.
She is an archetype for our age - a person who was battered and bloodied by the culture she lived in, a culture which was oblivious to the harm that it was doing to her, and a person who, to some degree, accepted the bloodying she received as a normal part of life, unaware of the real dignity of human beings and the beauty of life which they are called to live.
Today for many, the secular project administers a terrible form of bloodying and battering, and we accept this as a normal part of life. Take a look at what contraception has done in our culture; the countless babies shredded in abortions, the despair and loneliness which it has bred. Take a look at what the pagan media has done in our culture; the false expectations, the superficiality of human relatiosnhips, the sadness and the loneliness, the mockery of God and the Church ... I could go on. This saint is a great saint for our age because she symbolises in her life that which takes place in the lives of many today. And yet, her life was suddenly changed - she met Christ. Christ lifted her out of the fallen culture in which she was trapped and gave her a new life. And how did she respond? By spending the rest of her life telling people, not about the awful life she used to live, but telling people about Christ and who He was for her. Her incorrupt body lies now under an altar in a glass coffin (photo above).
What an immense privilage it is for us to be able to celebrate her feast today and to seek her powerful advocacy. And what an immense privilage to be able to celebrate the Mass in her honour each year now, on my birthday.
Posted by Fr Richard Aladics at 08:22 No comments:

A martyr in the family

Over the Christmas period I was chatting with my mother about the Catholic-reformation martyr Blessed William Freeman, who we think is one of our family forebears.
William Freeman was born in the Yorkshire village of Menthorpe in 1558. Menthorpe lies on the west bank in the River Derwent, a few miles east of Selby and south of the village of Aughton (home of the Aske family); today it consists of only a couple of farm houses. The photo below is looking west towards Menthorpe from the eat bank of the Derwent. Our family knowledge which has been handed down tells us that the Freemans (my maternal father's line) came from East Yorkshire. 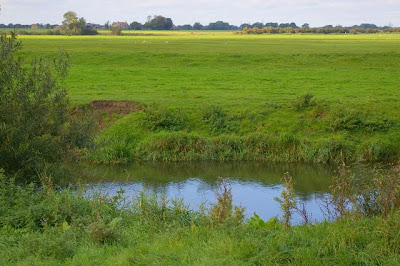 William Freeman was born to recusant parents though himself conforming to the State religion at some stage in his early life. He graduated from Magdalen College, Oxford, in 1581. He re-embraced the Faith in 1586 when he witnessed the martyrdom of Fr Edward Stransham at Tyburn in London. He left England to study for the priesthood in Rheims and returned to England as a priest in 1589, ministering for six years in Warwickshire. In January 1995 he was arrested at Stratford-on-Avon, and since his priesthood could not be proved by the authorities he endeavoured to secure his freedom and the possibility of continuing to minister as a priest. However, he was denounced by a fellow prisoner and sentenced to death. During his trail he spoke with immense freedom and courage about the Faith and about the Priesthood. Both at his trail and at the scaffold he was full of joy and spoke of his loyalty to Queen Elizabeth; he was hung, drawn and quartered at Gallows Hill (photo below), outside Warwick, on 13th August 1595. 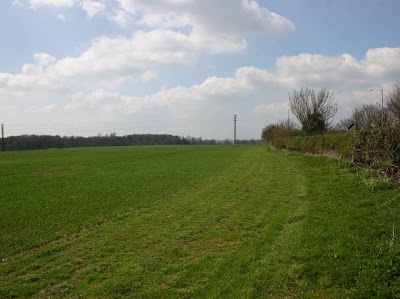 I'm sure that there must be a lot of Catholics who have a martyr in their history, and other branches of the Freeman line who can also claim this saint as one of their ancestors. We should be very proud of such forebears and remember the quality of their faith in Christ. In a certain sense they are for us today a measure against which to set our own goals and those of our families in the contemporary context.
May all the martyrs of England and Wales, Scotland and Ireland be a great light for us today.
Posted by Fr Richard Aladics at 00:22 No comments: