Prophecy in our time. 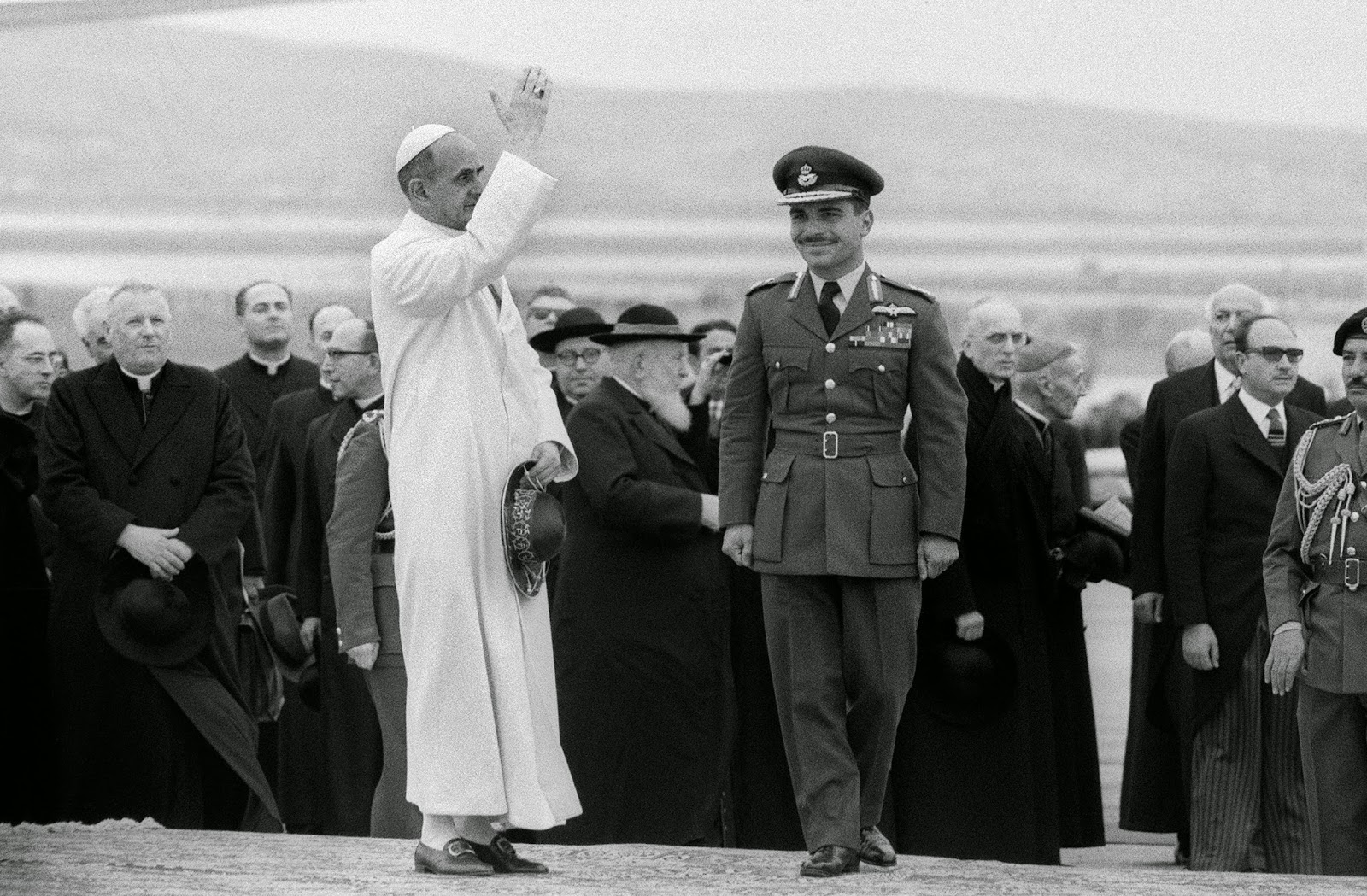 My first awareness of a Holy Father was in January 1964 when my mother bought a copy of the magazine Paris Match for its coverage of Paul VI's visit to the Holy Land. I still remember being introduced to black and white photographs in which the Pope was present at a place where Christ had once been.
Now that Paul VI is numbered amongst the blessed we should remember his greatness. He who had so many critics and not enough brothers was a great prophet of our age.
Two prophetic teachings stand out:
First, in his great Encyclical Letter of 1968, Humanae Vitae, he gave what is arguably the greatest account ever written about the nature of married love. Without this vision of truth the contraceptive mentality might have completely submerged married love. But his prophetic teaching has kept the door open.
Secondly, in his 1975 Apostolic Letter, Evangelii Nuntiandi, he proclaimed the need for a new evangelisation. And the thing is, at that time, I think that he was the only person who saw it. Without that proclamation, much of the Church might have become utterly Pelagian. Because of his prophetic vision of 1975 he enabled a great grace for many.
When all is said and done, the 1960s and 1970s is more about Pope Paul VI than anyone else. The BBC may not recognise this, but many will.
Posted by Fr Richard Aladics at 21:01 No comments:

One of the great Company. 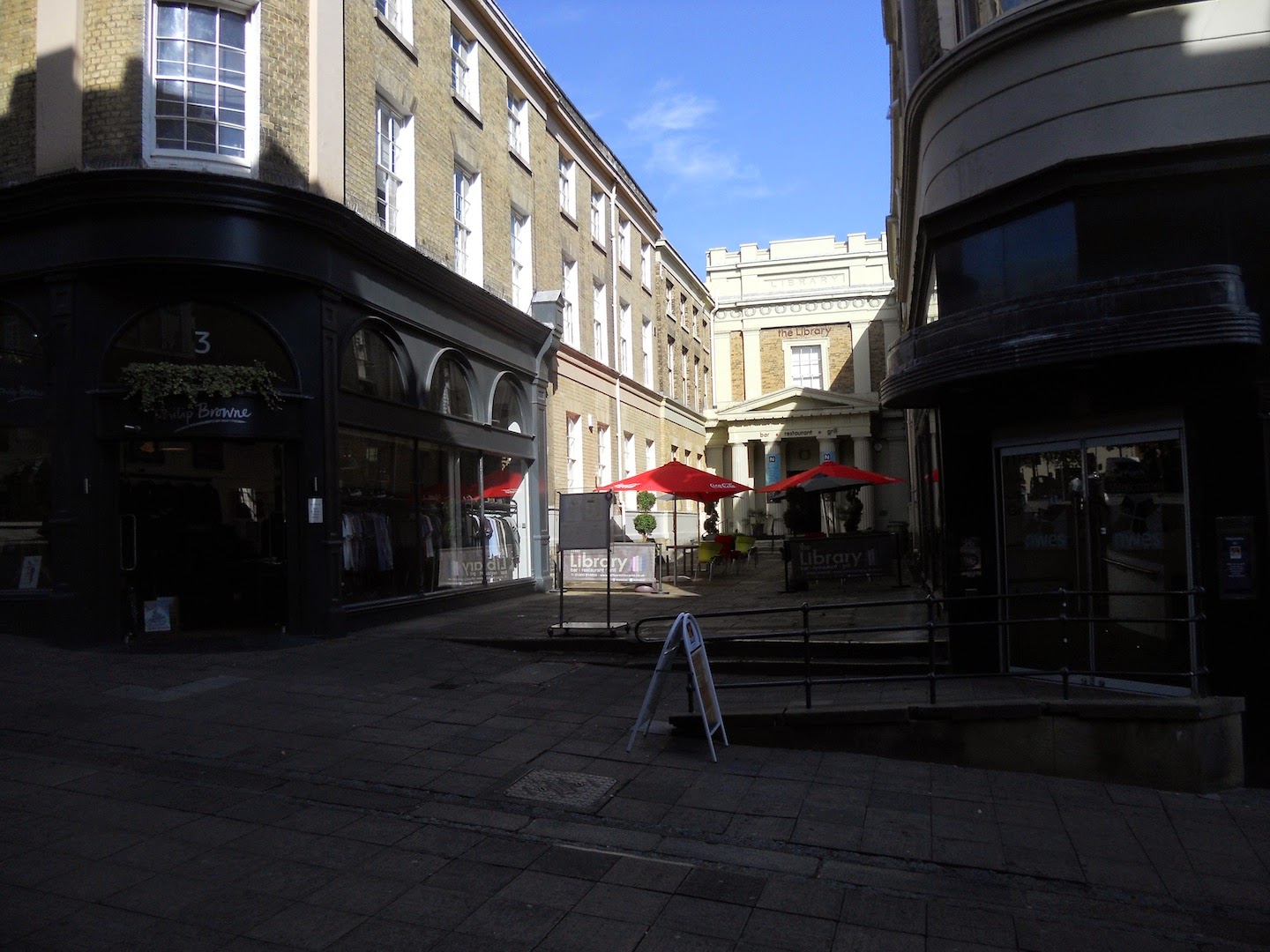 Blessed Thomas Tunstall from the Lake District, a Douay priest, ordained in 1610 was executed at Norwich on 13th July 1616. Earlier this year I went to pray at the site of his execution.
The photo above shows "The Library" - now a restaurant - just behind the Guildhall, which is the site of the old City Gaol. It would have been here that Fr Tunstall was held, after his arrest in King's Lynn, while awaiting execution. He had already spent four or five of his six years of priesthood in one or another gaol in England.
Norwich, like York, was a place of frequent execution over the centuries. But, whereas Norwich Castle, or its ditches, were a usual place for criminals to be executed, a special gallows was set up for the execution of Fr Tunstall. This was just outside the Magdalene Gate on the north side of the old city. 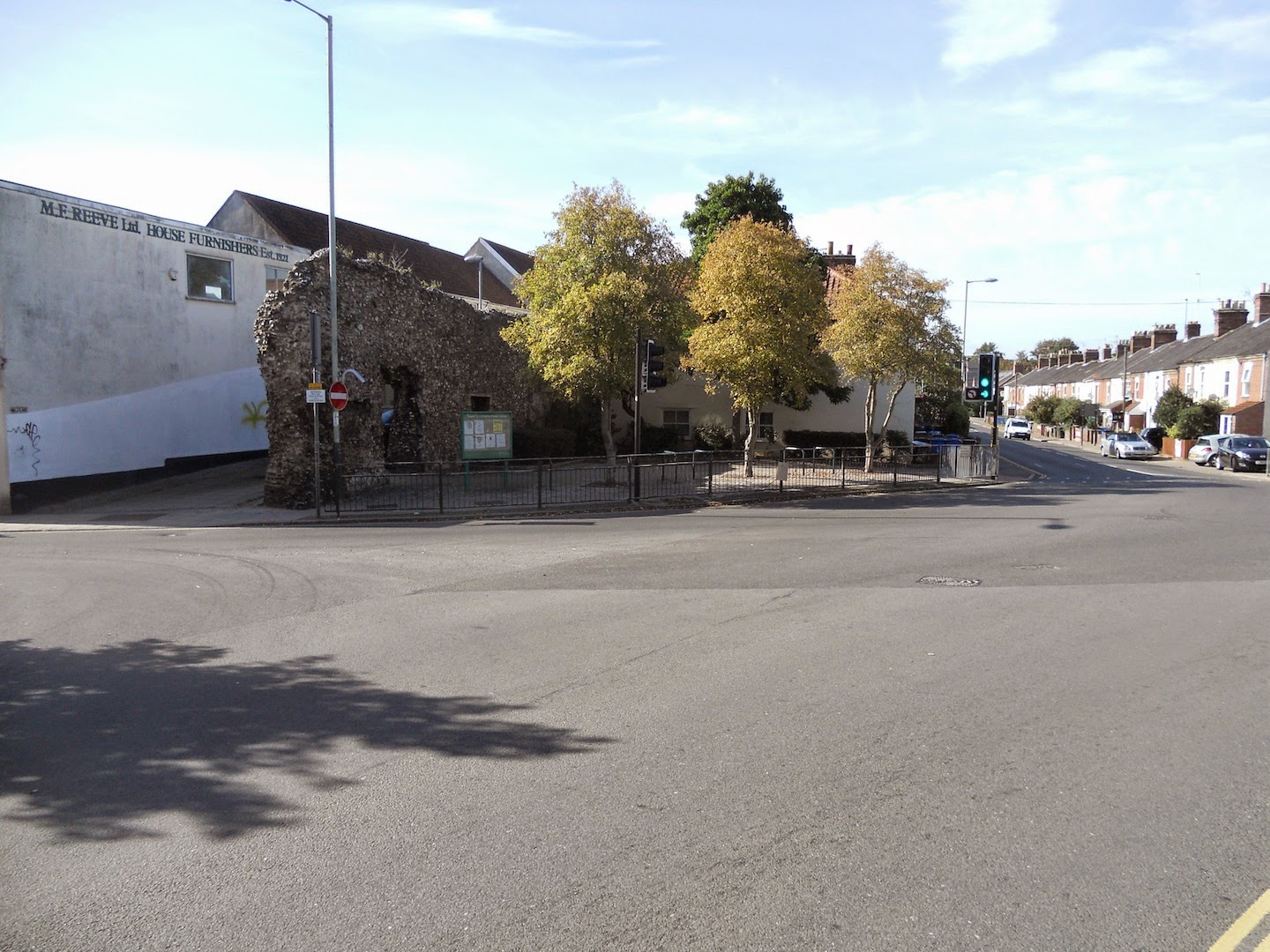 If you walk up Maudlin (or Magdalene) Street you come to a cross-roads just outside the old city walls. It was here, on this open space that Fr Thomas Tunstall was hung, drawn and quartered. 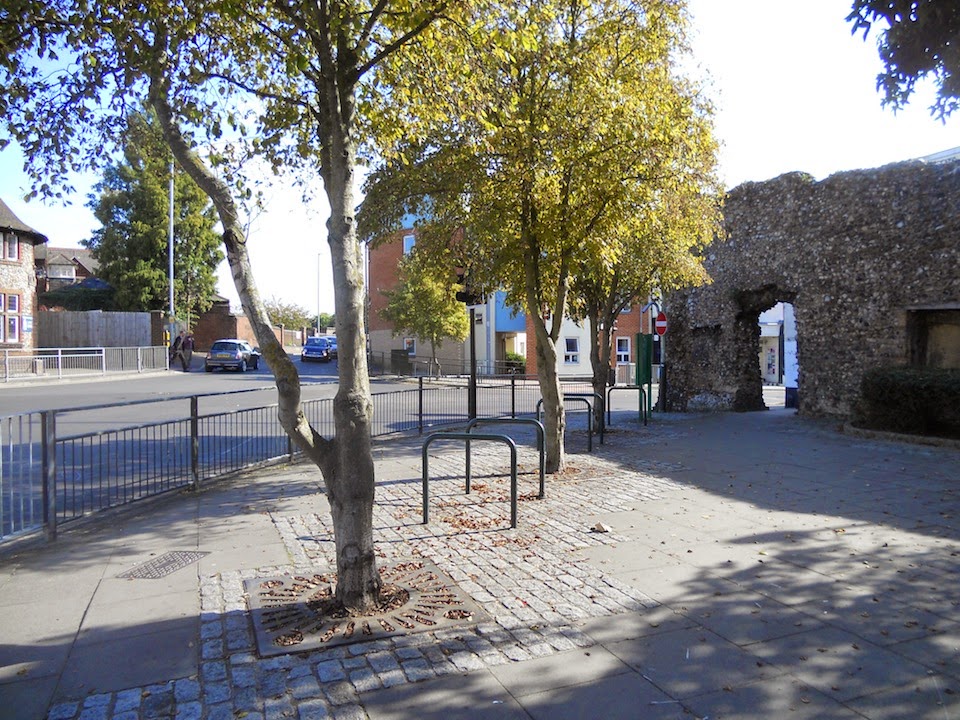 A part of the old city walls is still visible, but there is no memorial for this Blessed, who stands forever before the Throne, and before Norwich, pointing to the Mystery of Christ.
The Grid reference of the site is TG232096. There should be some commemoration of him here.
Blessed Thomas Tunstall, be a light for us today, and especially be a strength to your brother priests who are still on the mission.

Posted by Fr Richard Aladics at 11:06 No comments: 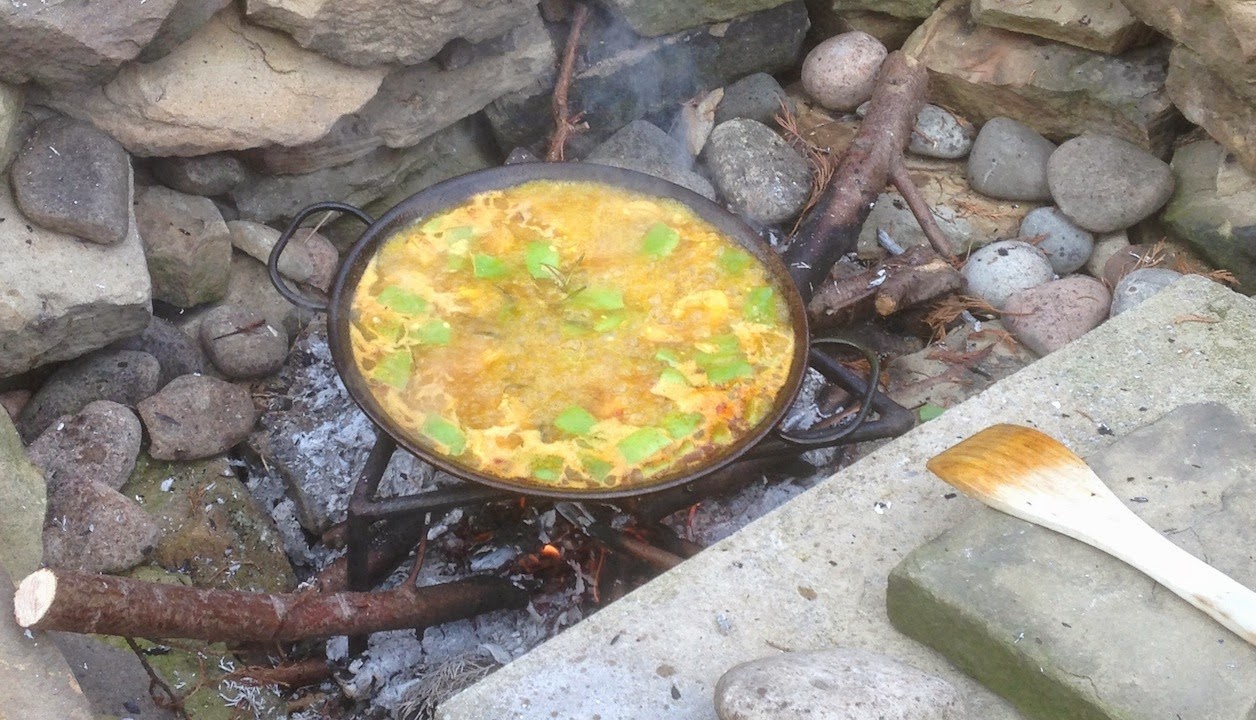 For all you paella fans out there; leave aside the gas hob and light yourself a woodfire. The difference between a paella cooked on gas and a paella cooked on an open woodfire is massive. The insipid gas tends to create hot spots, on which the rice sticks. The woodfire gives a fuller but even heat, which together with the smoke, makes the paella rich, unctious and life-enhancing. Unless prevented, all my paellas will be cooked on an open woodfire from now. This is one of the greatest dishes ever. Viva la paella Valenciana!
Posted by Fr Richard Aladics at 19:46 2 comments: 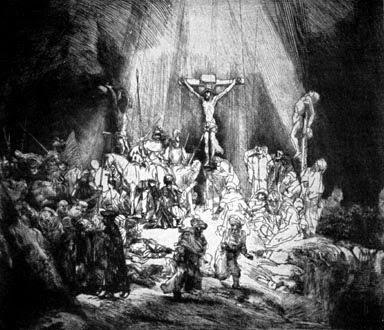 I have been following some of the media coverage of the Synod about the Family, as well as the occasional presentation by the Synod itself. I have been quite alarmed by the way in which the media, for instance the BBC, has referred to the Synod, showing how far detached from reality both the secular world and its media are.
The BBC recently said that it was "dissappointed" in the "vote" taken by the Synod Father's about the nature of the family. Fifty years ago, and even twenty-five years ago, the "world" would have been very glad that the Catholic Church was discussing the Family. But today's response to the Synod shows that the secular world, and its unhinged media, has really lost its points of reference, and its way-markers. The way in which the media has spoken about the Synod shows how idealogically led it is. Individualism, relativism and agnosticism, the form of this vaccuus ideology, are creating the basis for quite an unpleasant future.
The Synod of Bishops looks at reality; the secular media looks to idealogy. In fact, so much so is this the case, that I think that the secular media is the measuring stick for our culture today. If you want to see how far from reality our culture is, then just listen to the media.
Of course, all this is quite alarming, because an ideology-led society can do some very unpleasant things. We have some awful examples from the recent past. Today, it seems, the pre-born are taking the brunt of the fall-out.
However, the Church stands in reality, and Christ said that no evil would overcome it. We do not rely on ourselves, but on Him who governs all things.

Posted by Fr Richard Aladics at 17:33 No comments:

Such a great guide. 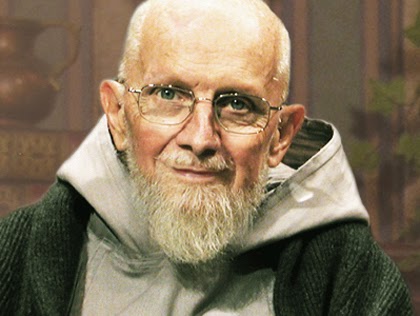 With great sadness I learn of the death of Fr Benedict Groeschel CFR; he died at 11pm on 3rd October, the eve of the feast of the founder of the Franciscan friars. May the Lord give him a special place in His Kingdom.
I first met him in Henley-on-Thames in December 1998 and was immediately struck by his integrity and his witness. I have met him on many occasions since then. He once gave me the best spiritual direction that I have ever received from another human being - that was in Leeds.
This humble friar had one of the best minds that I ever knew; he must have had a photographic memory for he could draw precise quotes from a huge range of texts, and draw out from them their meaning.
As a leader in the Christian life, he is one of the towering figures of the 20th century, particulary in the way that he guided many through the chaos of the past few decades. I will remember him very fondly for the rest of my life, especially as I regularly listen to his recorded talks. I will miss him. While I was in Sydney I had hoped to make another priest's retreat under his direction, but by the time I had returned to the UK he was no longer strong enough to give retreats. I am immensely grateful to him for all he did for us priests of the new evangelisation.
The friars of his community - the Friars of the Renewal - will be saddened at his passing, but he has given them a very good foundation.
I remember him saying, that as he was from New Jersey, going to Purgatory would be a "big step up". In fact, he said, "I'm looking forward to Purgatory!" Well, he has the prayers of many to support him in this last journey. And may he, who humbled himself before the Cross of Christ each day, be now transformed by Mercy.

Posted by Fr Richard Aladics at 13:52 No comments: