Yesterday evening I went with a group of young people to see the film "God's not dead". I really enjoyed this new Christian film. Yes, it is quite American and somewhat implausible in parts. For instance, it is hard to imagine a first-year university student being able to have such a command of the contemporary debate about science and faith in the way that the film portrays. Yet, it was very refreshing to see faith in Jesus Christ so explicitly referenced on the big screen, and to hear grace being referenced in ordinary conversation. We long to hear people speak about grace and the work of God in normal life, yet it hardly ever happens, in my experience. Instead, we confine ourselves to more hollow subjects.
I also applaud the film for the way in which it "took the lid off" the reality of the Christian presence in our society, a presence which, today, tends go unspoken and unexpressed. In spite of this, the whole of life is lived at the interface of grace, and this film went some way to show this and, hopefully, to inspire a more normal public expression of faith in Jesus Christ.
What is of particular note in the film is the way in which masculinity is portrayed. In our era, in which there is a crisis of masculinity, "God's not dead" really does set masculinity in relief. The main character in the film, the young man, played by Shane Harper, expresses the basic identity of masculinity: leadership, service, strength of character and, above all, responsibility for the Gospel. Responsibility for the Gospel is the foundational task which all men have, a role which goes to the heart of today's crisis and one which the film nurtures and expresses quite well.
Christian films are few and far between; this film is a worthy addition and, I think, has been made with both self-confidence and the Gospel as its blueprint. "God's not dead … He's roaring like a lion!" I hope that we will get more and better Christian films as our era progresses.
Posted by Fr Richard Aladics at 06:36 No comments:

The whole world is waiting. 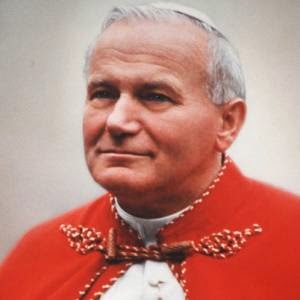 The whole world is waiting to celebrate the victory of Jesus Christ. There is a strange expectancy in the Church. After the long Lenten fast and the impacting events of Holy Week, I wonder if we don't all feel as did the first Apostles in the Upper Room, or the souls who had waited for so long in the place of death.
Yet today there is a new ingredient in our pause before Easter; today the Novena seeking the intercession of Blessed John Paul II begins. This Novena will end the day that he is made a saint - 27th April.
Amongst the many needs that we can place before him are surely the ending of contraceptive mentality and practice, and the ending of abortion; these two have brought our civilisation to its knees. The power of this great advocate of grace when he was among us, tells us how powerful must be his prayers now that he is in his Father's House.
I have placed the Novena prayers on my parish website: takenupingrace.wordpress.com
Posted by Fr Richard Aladics at 11:49 No comments: 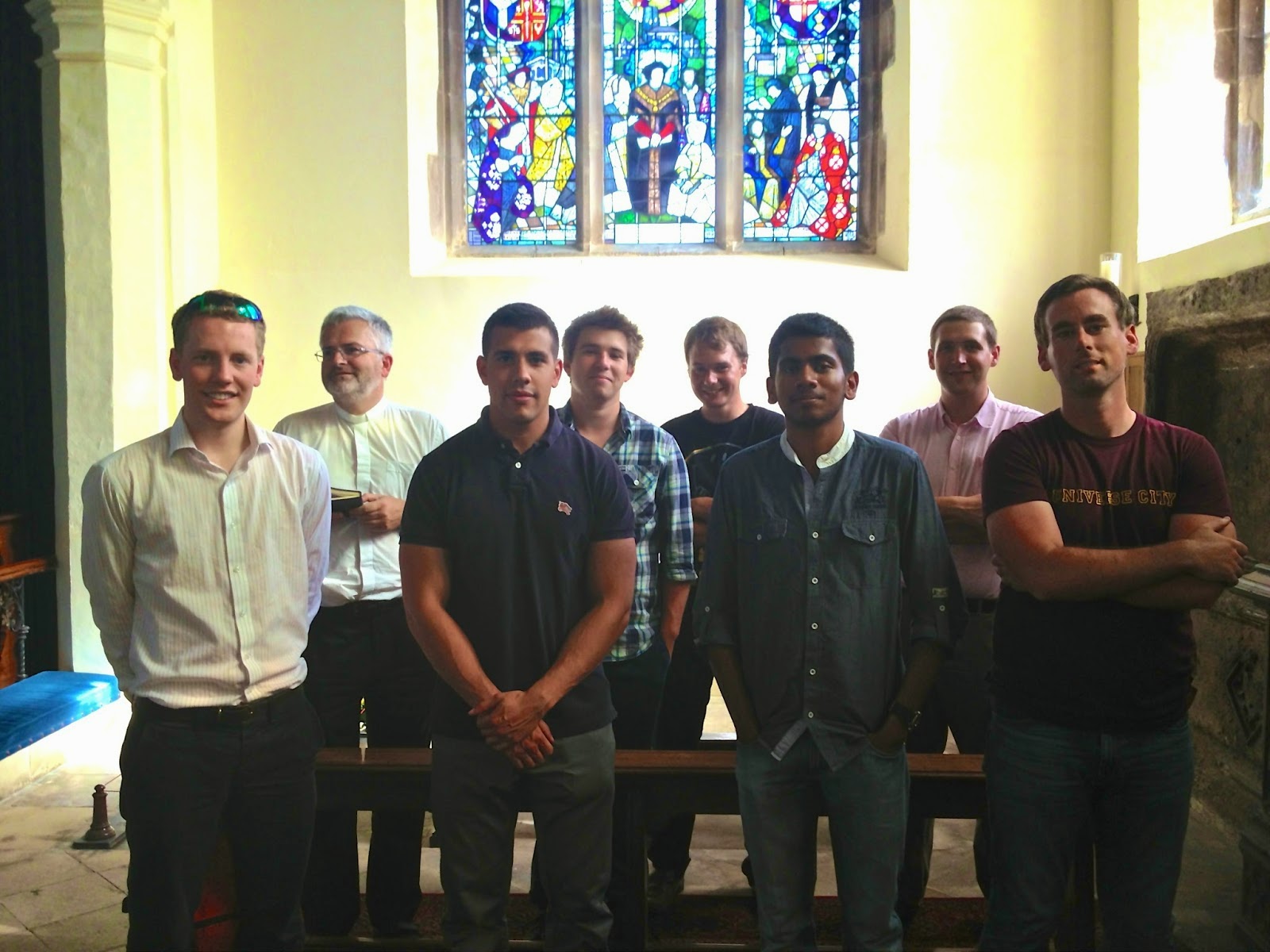 Although this photo was taken last year at the shrine of St Thomas More in St Dunstan's church, Canterbury, and shows the Southwark Mission Team (including a couple of others) at the very start of their life together, I am still reeling from the impact of their missionary endeavour in my parish these last nine days.
I am extremely grateful to Fr Stephen, and to Michael, Anthony, Will, John and Tony for the considerable work that they undertook in giving a parish mission in Ossett and Horbury. The mission was entitled, "Heart speaks to heart, an introduction to living Christianity today". They achieved that very purpose, leading the parish through the basics of the Christian life, bringing people together to live that very vision, and bringing both newcomers and those who have not been a part of this life for some time, to practice the faith with a new openness.
I was sorry to see them leave on Palm Sunday as I would have liked them to stay and consolidate their work for at least another two months! This is a mission which will not be forgotten for many years to come, as a new foundation stone has been given to this parish. It was fashioned for us by the Lord and worked by these men. Pray the Lord of the harvest that he would send workers into his fields … The Southwark Mission Team have been fashioned by prayer and faith-filled hope. May they all go from strength to strength.
Posted by Fr Richard Aladics at 21:40 No comments: Later today, Fr Stephen Langridge and the members of The Vocations Centre mission team will arrive in St Ignatius' parish, Ossett. Here in the parish we have been looking forward to, and preparing for, this parish mission which they will lead. The mission, which we have called Heart speaks to heart, lasts for eight days during which time we hope that there will be an opportunity both for those of there household of faith, and those not already of this household, but who are attracted by the mission events, to have some contact with this team.
The mission team will be leading events each day in the parish, and you can find fuller details on my parish website: www.takenupingrace.wordpress.com.
Acknowledgements to The Vocations Centre for the above photo, which shows some of the team preparing a car for the journey from Kent to Yorkshire.
Posted by Fr Richard Aladics at 06:23 No comments:

The Pearl of York. 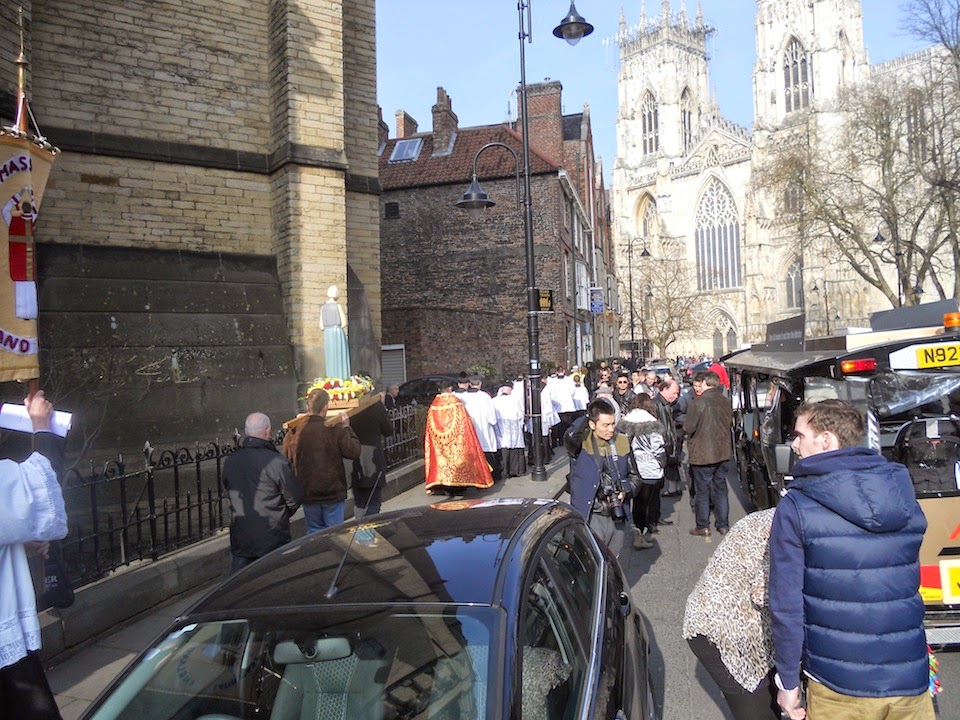 It was a great joy, last Saturday, to take part in the annual St Margaret Clitherow Pilgrimage in York. In the photo above the procession is just setting off from St Wilfred's to move through the city.
Fr Richard Duffield preached a great sermon during the Mass, speaking of how she died to protect people such as ourselves, and that, although we come on pilgrimage to honour her, we come firstly to seek her prayers. 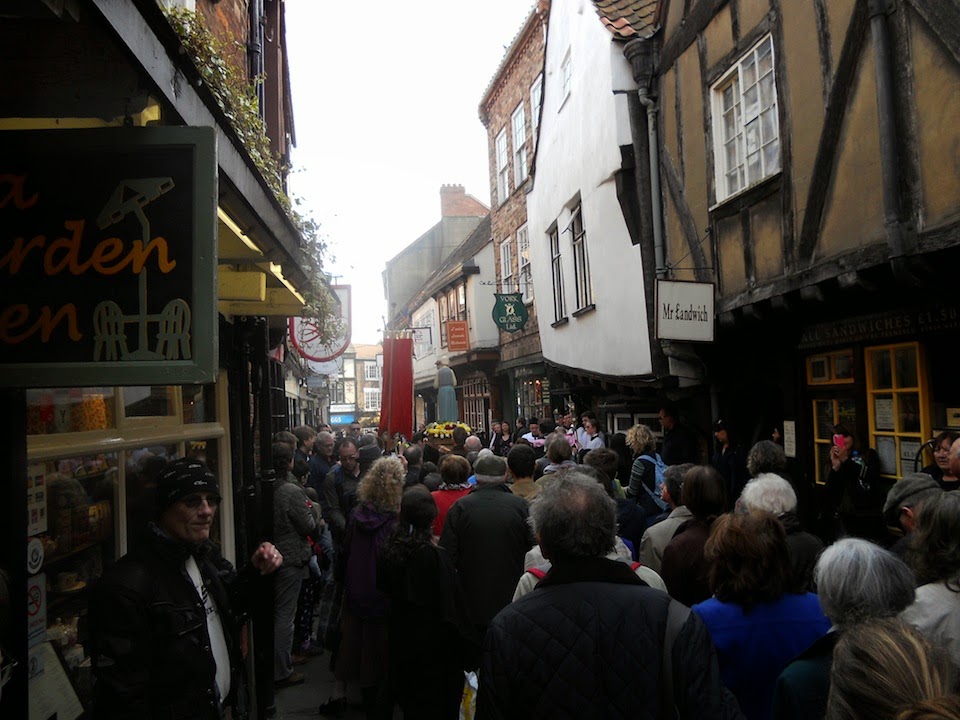 We stopped briefly to pray outside her shrine in The Shambles before moving on to the site of her execution on the Ouse Bridge.
This year's pilgrimage was marked by the welcome we received by the Oratorian Fathers who now run the city parish of St Wilfred's; may their life and apostolate be a beneficiary of the powerful intercession of the Pearl of York.
Posted by Fr Richard Aladics at 06:41 1 comment: