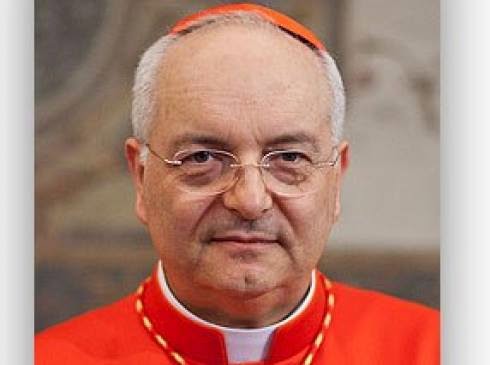 For just three years Cardinal Mauro Piacenza was the Prefect of the Congregation for the Clergy. During that time his leadership of the priests of the Church was wonderful. The way he spoke to priests, and the way he spoke about the priesthood was a great grace. He placed the identity and mission of the priest firmly in the priest's sacramental conformation to the Priest, Jesus Christ. The rather secular and soulless notions about priests being aligned with a function or with a socio-political role in the Church or in the world he set aside and, taking up the great movement, which is the New Evangelisation, Cardinal Piacenza has, in such a short time, given priests a whole vision for the renewal of our lives and mission. Cardinal Piacenza, along with all Curial Office-holders stepped down from his post when Bendict XVI retired as Pope. His last work was to give us a new edition of the 1994 Directory on the Life and Ministry of Priests. This new edition of the Directory is an inspiring and grace-filled document to guide priests in this new era. In the St John Vianney Fraternity we are presently making our way through this document, and I, for one, am extremely grateful to Cardinal Piacenza for all that he has done for the Priesthood.

Posted by Fr Richard Aladics at 15:53 No comments:

The beauty of the Priesthood. 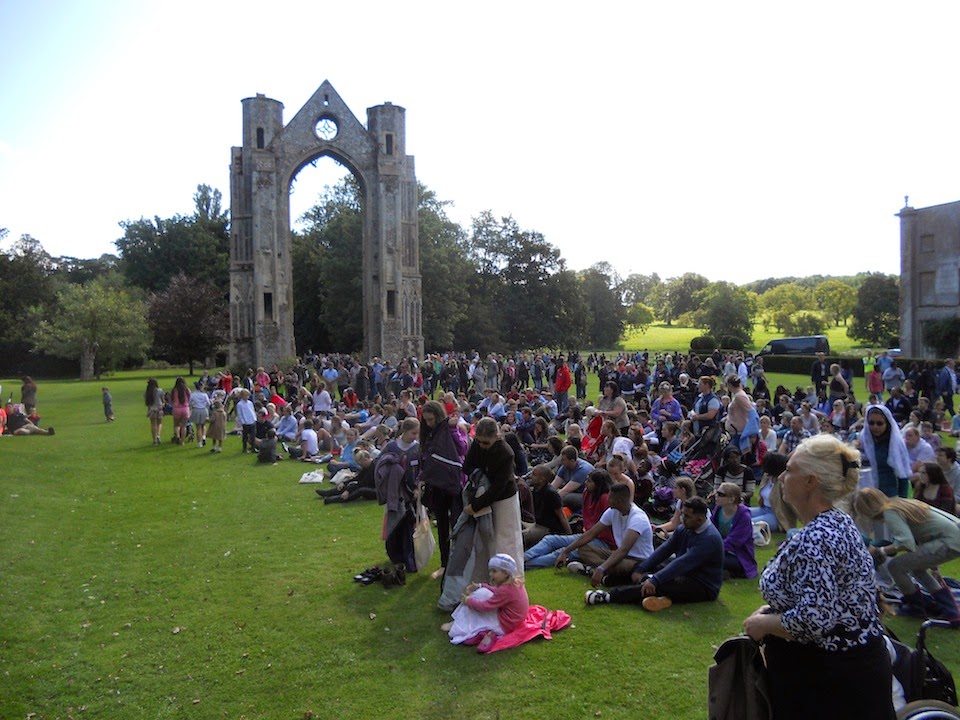 Celebrating the Mass on the site of the original Holy House of Walsingham is a great grace. To see the lawn, where once the nave and chancel of the Priory church stood, thronged with a great crowd of young people was a moment fo great joy in the Church. Bishop Mark Davies celebrated the Mass - the joy on his face was evident, and the delight of the company of priests who concelebrated with him is something that I will remember always. 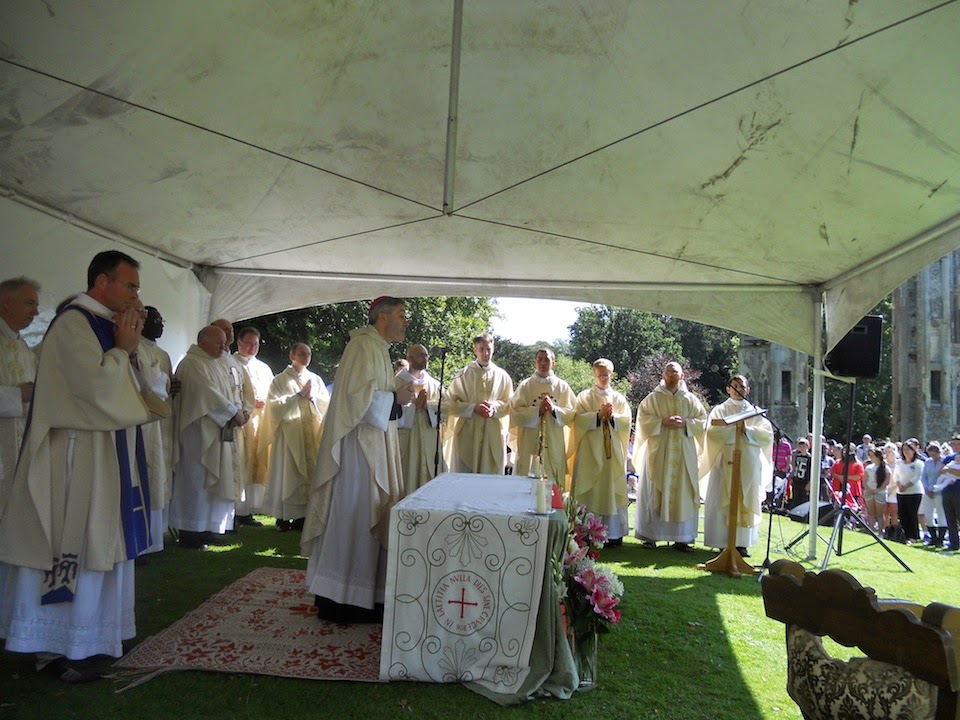 When priests come together there is a coming together and strengthening of the priestly charism. I am personally honoured that my presbytery is a house which is frequented by priests, but taking part in the mission of the Church in such an event as the Youth 2000 Festival at Walsingham, is such a wonderful confirming of the identity and dignity of the priest That the priest facilitates the action of the Holy Spirit through the gift of self. At Walsingham on this day there was no hint that any of us priests had a managerial, administrative or functional role. No, the Church was alive in Christ, and we were enabling that life through our sharing in the Priesthood of Jesus.
Posted by Fr Richard Aladics at 09:08 No comments:

The beauty of God's plan. 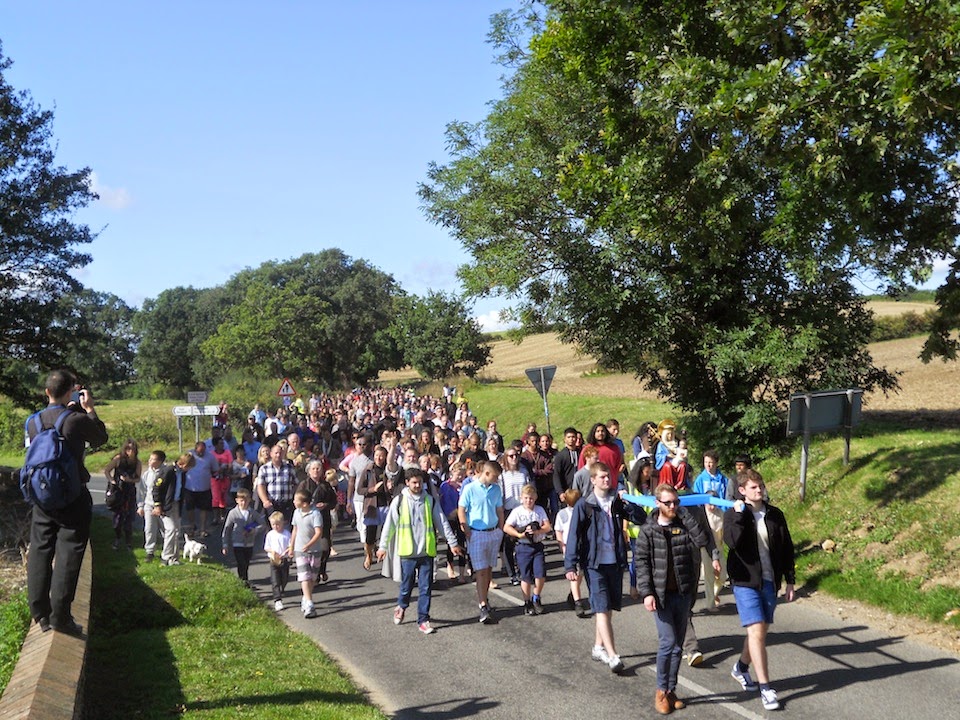 For the first time at the Youth 2000 Prayer Festival, one of the Masses was celebrated in the ancient Priory grounds. Twelve hundred young people walked the Holy Mile singing songs of praise to the Holy Trinity and in honour of Our Blessed Lady. This was the high point of the Festival this year; the Church on the move is a something that is both visible and attractive. 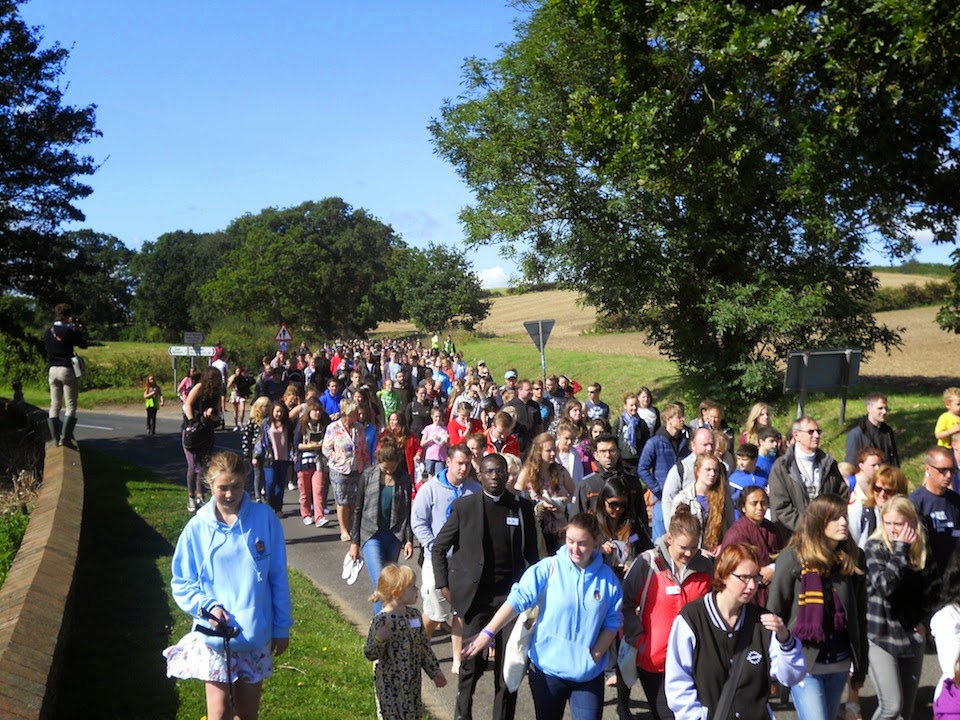 The column of young people just kept coming from the Festival site by the Slipper Chapel, following the ancient pilgrim route, some of them barefoot, as they approached the 'Holy Land of Walsingham'. The enthusiasm was tangible. 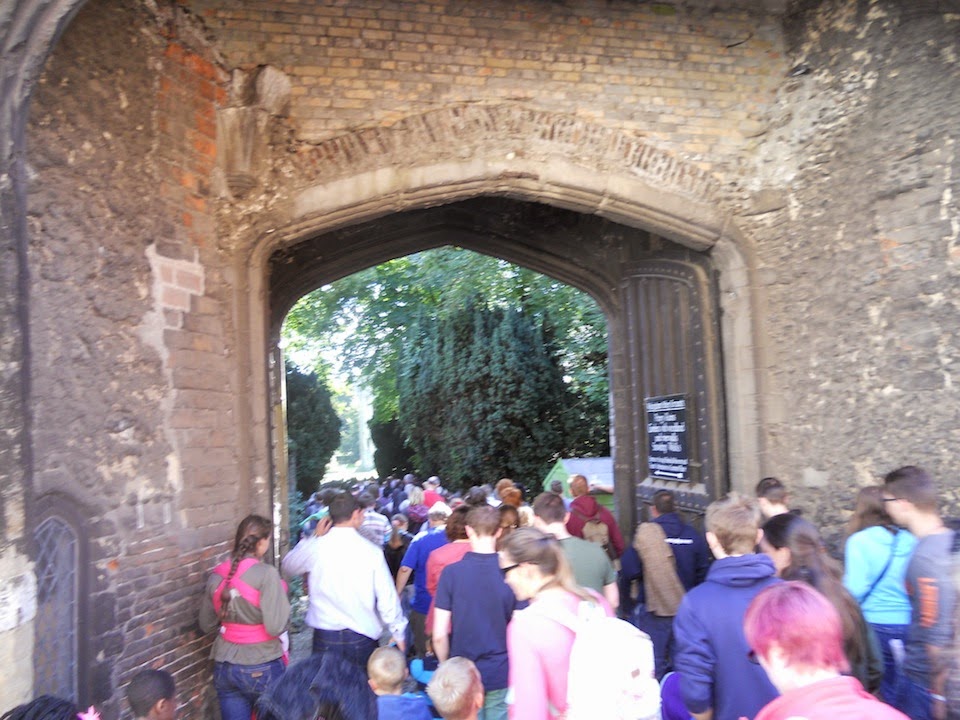 As the young pilgrims passed through the old Priory gatehouse on the High Street, to the open lawns where the original Holy House had stood, and where now an altar had been set up for this Mass, I could suddenly see how Our Lady Herself is writing the history of the New Evangelisation of this country, through these striking events at Her Shrine in Norfolk. In drawing these young people to Her simple Shrine at Walsingham, She is drawing them to Her Son, in whose gentle, but life-giving presence, we are formed into the Church.
Posted by Fr Richard Aladics at 18:17 No comments:

The beauty of conversion. 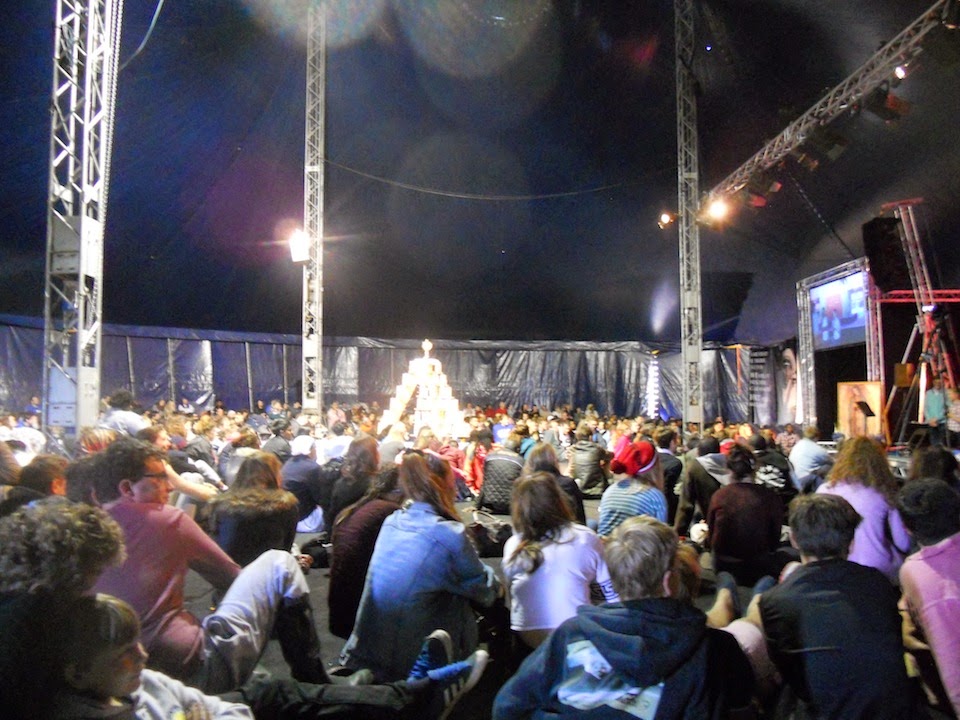 At The Youth 2000 Prayer Festival in late August in Walsingham, about 1200 young people from across the country came together and spent for and a half days in the close company of the Blessed Eucharist enthroned in their midst.
This year's Festival marked the 25th anniversary of the founding of Youth 2000. This movement, founded in England, but represented now in many countries, has held a summer Prayer Festival for young people in England since the early 1990s. In August 1999 they first set up the Festival next to the Slipper Chapel at Walsingham, and for fifteen years now they have drawn an enormous crowd of young people to engage in time of joyful encounter and growth, awakenng them to the person of Jesus and to the new life of grace which he gives. Lives are changed, light is received, purpose is engendered and vocations are born.
For the priests who come to serve the Festival it is a time of great joy as we see young people drawing life from the Saviour and becoming established in His Church. Youth 2000 was born from World Youth Day in 1989, which that year took place in Santiago de Compostella, and mirrors those prophetic events: Christ at the centre surrounded by a community of disciples. The building up of the Church in this country lies at the heart of the mission of Youth 2000. The whole event takes place under the care of Our Lady of Walsingham, to whom we entrust the Christian formation of this generation.
And of course, when you are camping out in the open fields of Norfolk there is always space for a paella! 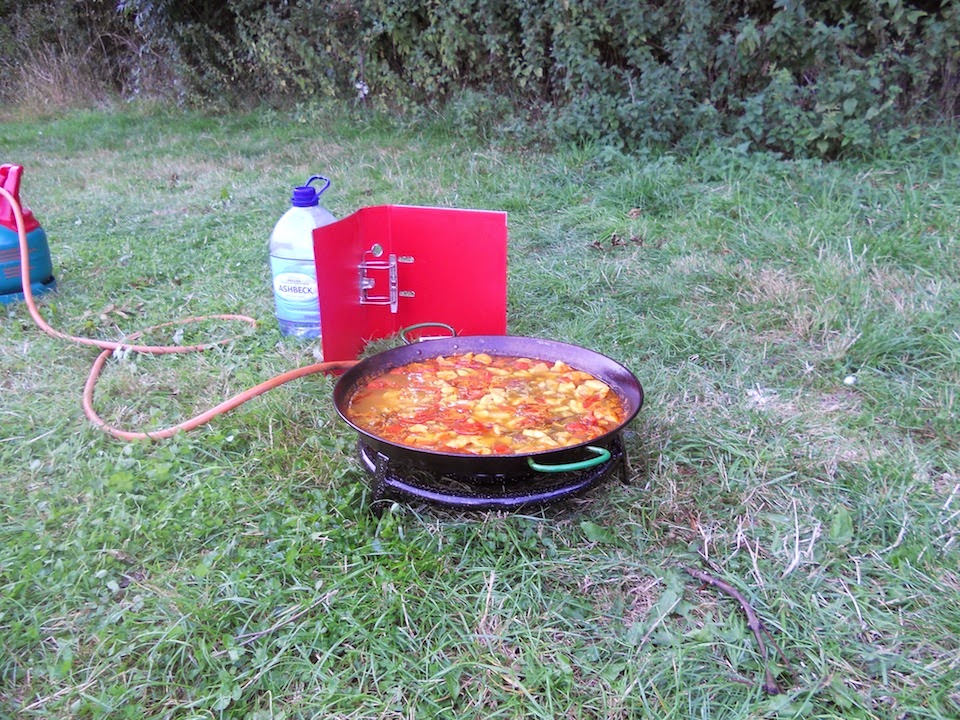 Posted by Fr Richard Aladics at 06:50 No comments: