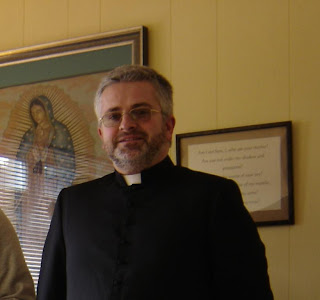 When bombs expode in Afghanistan and the news report is at pains to tell us that this act by Muslims is not faith-based but merely an abberation by some citizens, it is yet another way in which our culture has separated religion and life, spirituality and culture; making religion an unhappy tag which really doesn't help any more. Our whole western culture separates spirituality and life. We do it best of all by promoting abortion and saying that a person has a right to choose quite apart from what God says. And the media downplays the meaning of spirituality so as to promote the culture of death with more impunity.
Of course spirituality is connected with life, in fact, it is spirituality which informs our life. At least, this is the case with Christianity which is an incarnate faith - our spirituality is the very substance of our lives.
How then can someone who has been at the forefront of promoting the culture of death become a Catholic except by a radical change of heart. How can someone who has been, in the most public way, an architect of the culture of death become a Catholic?
Tony Blair's conversion seems very much like a disincarnate conversion. His public life was given over to promoting the culture of death, but his religious life on the other hand is a private matter. This 'cafod catholicism', a catholicism in which the personal and the social have no real connection, is deameaning to the Church. The Church needs to hear Tony Blair's testimony of conversion so that the grave matters, of which he had governance, can be seen anew by many in the light of Christ. After all there are many others, much better than he, who we should seek to convert.
Posted by Fr Richard Aladics at 17:34

The stumbling block might be the very word "conversion". 2 poss meanings

2. change of heart. ouch. This one is painful.

A useful pointer here might be the Greek for repentance, "Metanoia", literally (as you know, Fr.) "change of MIND" but also undersTood to mean a subsequent change of HEART orchestrated by God, once he has our surrender to a change of mind/decision to repent.

I suppose we could be witnessing a controversial step in a powerful conversion. I am so jaded and cynical and can`t stand either of the Blairs that I would bet on that not being the case, but God is so much more generous, and in the meantime we have to pray.

I note that the Holy Spirit is not at all fussy whom He uses to accomplish His work, and Blair's new role as Middle East envoy could become quite interesting.

February 2nd is the feast of the Visitation.

NO. February 2nd is the feast of the PRESENTATION. see ? the HS is not fussy whom he uses. Even idiots.

"You know you can't have a religious faith and it be an insignificant aspect because it's, it's profound about you and about you as a human being," Blair said in a BBC documentary.

Will it ever happen? No!

The insulting thing is, that the Church calls us to repentance at this time of advent, yet she welcomes someone who has so far not publicly repented. For a public figure such as Blair, then surely that is something he has

I was at a seminar in Westminster lately and the MP's were all in agreement about how the promotion of embryo research was all Blair's idea and it was his agenda not that of the Labour party.

Metanoia happens sometimes overnight, but with Blair we know he has been considering catholicism for some time now. I'm not sure he has even changed his mind.

At a music practice this afternon at our parish church, for tonight's Midnight Mass, the topic of Mr Blair's conversion came up, amongst the 12/13 year olds as we were packing away instruments. This is what one of them said: "SO, is it actually OK in some cases to be in favour of abortion and euthanasia, then."
That is what they thought. They were not being sarcastic. They wanted to know. This has sowed confusion. And it is not being judgmental to be VERY VERY VERY upset about this.

This is a brilliant post Fr. Thank you for writing it.

May the peace of the new-born Christ be with you.

Having only just read both the original post and the comments, I wholeheartedly agree as this is an issue that I have considerable qualms about.
Given Blair's stance on the many anti-Catholic issues, already quoted in the pre-conversion days, nothing less than a complete and public renunciation of his previous attitudes is required. Failure to do so is both a scandal to the Church and those responsible for his acceptance into it.

The Church is, of course, renowned for its Saints and Sinners but unfortunately the Blairs appear to believe they are of the former group.
His wife and their local Parish Priest apparently never even questioned his reception of Holy Communion at Mass for a long time prior to his reception into the Church. Where is their personal integrity with regards to their faith and morals, in these matters?

With regards to his role in the Middle East, little is actually being said about any work he is undertaking as he only appears for photo opportunities to maintain his public persona and to ensure he has publicity for his highly paid 'lecture' tours.
When you consider the anti-Catholic attitudes of the man, his responsibility for his encouragement of the 'debt crisis' in this country, as well as waging war in Iraq (against Papal advice), he should be sat in sackcloth and ashes, never mind being feted by the multi-millionaires of the rich world and flying about in private jets and the enjoyment of the consequent lifestyle.

What about his commitment to support the African continent as he claimed in some of his visionary rhetoric in his last two years in Government, should he not be fulfilling those promises?

Many people in this country will suffer for a long time as a result of the last ten years and this current debt situation. Indeed the whole of this Government's time in office can be summed up in the "Northern Rock" debacle as the whole economy has been like a house built on the sand with money borrowed to falsely sustain a myth of growth and wealth. The whole principle of global economics is also gradually unravelling and will eventually collapse like the Tower of Babel.

But we must, in all charity though, look to St Paul for some comparisons and reflect on his change of lifestyle and commitment to his new found Faith. I wonder if the Blairs' will ever replicate such dramatic movement.
Unfortunately, I doubt it.

Blair's "conversion" is certainly not the New Evangelisation, nor must we be distracted in any way from the NE by Blair.