How hot is it going to get

Fr Tim's great blog recently gave coverage to the BBC TV programme "The Big Questions" and praised the courage and ability of the young Catholic father James Preece, who took part in the programme and defended the Pope against the onslaught he was receiving from others on the show. 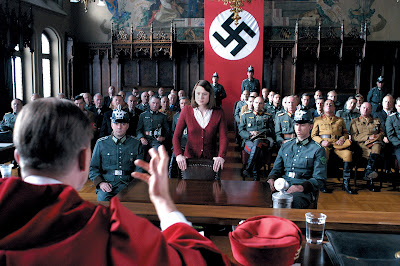 This makes me wonder just how hot things are going to get, and at which point Catholics need to turn and run for the hills (like we did all those years ago when St Stephen was stoned). Certainly, we need people who have the courage and, whatsmore, the charism, to appear in public before an agnostic and even hostile audience and be able to gently express the truth. However, when we acknowledge that such shows as this are planned and produced by powerful and clever atheists within the media, who want to show how the ordinary person in the street should think about, react to and speak to Christians; to show how far they can go with us, as it were, in terms of expressing derision and hatred, then we need to be discerning about which forums to engage with. The culture of death hates the Gospel, something which was so well expressed in the film "Sophie Scholl", when the Nazi judge screams at the young defendents who are on trial for their lives.
Thank you James for witnessing to the truth in such a difficult environment.
Posted by Fr Richard Aladics at 21:14

Father, we Catholics have largely forgotten what it is to stand up for our Faith. Even simple acts like not eating meat on a Friday pushed one into explaining why to enquiring non believers.
Today, there are small groups who pray outside abortion clinics (a most gently and charitable way of both expressing disapproval and invoking help from Our Lord).
May I suggest that this is a good place to start. A Rosary vigil is held outside the John Radcliffe Hospital in Oxford at 3pm on the last Saturday of every month; there are others - please join them.

Turn and run for the hills ?

You must be joking. We've stuck it out so far.

Shepherd.. you're in my diocese.. you should join the paltry half dozen that pray outside our 2 local abortion providers each month. Oxford have got a lot of support - we have none. The priests won't join us. They think we're nutters. "Life" have even packed up in our area due to lack of interest. Why don't you and your Mrs come and join us. It's nearer as well. We just say the rosary (too exhauisted and demoralised to do anything else) and then go home.