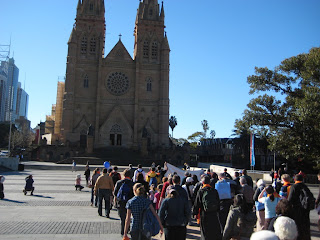 One year on and I returned to Sydney to participate in the Congress of the New Evangelisation. This extraordinary event, which took place last week in St Mary's Cathedral and around the CBD in Sydney, fanned into flame the immense grace of World Youth Day 08.
Apologies for the long absence - over five weeks, but back in the UK I only had intermittant access to the internet, and then, during the Congress itself the same was true. I am finally back at Campion College and can attend to this long-forgotten Blog.

A month in England afforded me a good rest and necessary time to spend with family and friends. The sun was warm over Yorkshire but I sensed again the human decline, a consequence of the ebb of Christianity in the nation.

The Sydney Congress of the New Evangelisation, 19th - 26th July, held on the anniversary of World Youth Day, exceeded all expectations. I was the deputy chairman of the planning team, and although we had envisaged much that would happen, the eight days of the Congress far surpassed our humble plans. I hope, over the next few days, to provide a glimpse of this grace-filled event in which a light has been lit at the heart of the Church in Sydney.
Posted by Fr Richard Aladics at 09:59