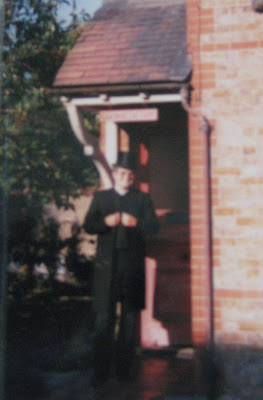 In 1989, the year after I was ordained, I received an invitation from the Lord Chamberlain at Buckingham Palace to attend her Majesty's Garden Party that July. For the occasion I borrowed a top hat and frock coat. The photo above was taken in the evening of that day in Feltham; sadly it is not a good photo, but it is the only photo that I have dressed in the said garb. It's not often you see a Catholic priest dressed like that, but I do have photos of my uncle who was a Jesuit walking on procession through the streets of Manchester and Preston in the 1950s wearing top hat and morning coat.
As for the Garden Party, it was tremendous; the Queen and Lady Diana were there. At one point I was quite close to the Queen, she looked my way and smiled. I doft my hat and bowed to her. She is exsquisite.
Posted by Fr Richard Aladics at 06:48

My husband's cousin was Deputy Lieutenant of Staffordshire - maybe she was also there!
Yes, the Queen is a lady and a legend. May God save her.