Could you show me the chapel? 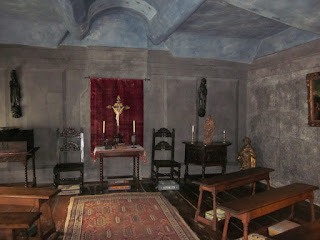 On his second evening at Moseley Old Hall Charles asked Fr Huddleston to show him the secret chapel in the house. The chapel, which is on the second floor of the house, was in use until 1825. The painted plaster walls and ceiling date back to the 1700s, but the crucifix could have been the very one which stood on the altar when Charles II was there.
Charles told Fr Huddleston that "if it pleased God to restore him to his KIngdom, [Fr Huddleston] would never need more privicies." And indeed, those words were fulfilled, for in 1678 Parliament named Fr Huddleston and others as being free from the anti-Catholic laws of the realm.
Fr John Huddleston, born in Farington, Lancashire in 1606, died a chapalin at Somerset House in London in 1678. It was he who Charles II called to his bedside on 5th February 1684/5 as he lay dying, and who received him into the Church.

Posted by Fr Richard Aladics at 10:50