Towards an honest posture. 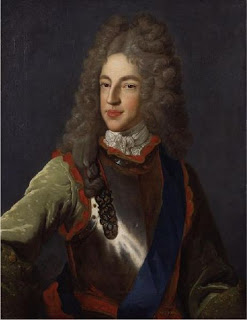 The questions being raised by the Prince of Wales about the Royal Succession are a step in the right direction. However, it would be reasonable to ask, for instance, why stamp collectors are not barred from the British Throne as are Catholics?
The most important question to ask is what is the basis for barring Catholics? Once this question can be publicly asked then there is a chance that the present discussion about the Succession become one that goes beyond another round of posturing. Surely the English have it in them to come to terms with truth.
I paste the above image of King James III of England, not as a pro-Stuart gesture, but simply a reminder that the 1702 Act of Succession was set in place specifically to exclude Catholics.
Posted by Fr Richard Aladics at 16:19

In my understanding the ban against Catholics on the throne had to do with the gulf (at the time) between Catholics and Protestants, not to mention the whole 'We don't like people who might side with the French' thing.

I suppose the idea of a Catholic monarch appointing Church of England bishops would be objectionable to many (isn't it also 'not done' to have a Catholic as Prime Minister?). Of course we have fifteen dozen different faiths going around which aren't Protestant, but on the 1700 stage those players just weren't there to be paranoid about.

Moreover, Catholics have a very clear Vicar of Christ, and there are enough examples in history of the Pope ticking off England for not doing what he wanted (whether what the Pope wanted at each moment was something truly Good and Catholic is perhaps open to discussion). It would seem plausible that a country free from foreign religious (and then some) control for a couple of hundred years would not want to relinquish such independence.