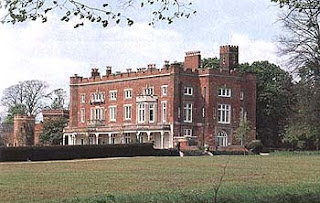 I am not a great fan of any of the Tudors (as you might imagine), but last year I drove through the village of Hunsdon in Hertfordshire, hoping to catch a glimpse of the old Tudor retreat of Henry VIII and especially of his daughter, Mary Tudor. She spent much of her teenage years at this former royal palace before becoming queen. It was from here that many a royal hunting party set out.
The house is now privately owned and I only caught the merest glimpse. The house was built in the late 1400s of brick. It has been re-modelled, in stone and brick, many times over the centuries. The photo above shows the house as it is now; the image below is a drawing of the house from (probably) the late 1700s. At the time of Mary Tudor the house is thought to have been four times its present size. 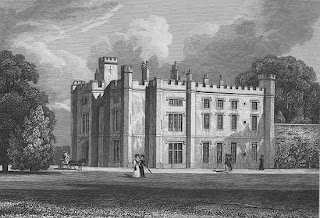 The village church stands very close to the house and there appears to be a private access between the two buildings. It was a shame that the church was locked as, no doubt, Mary Tudor would have taken part in the Mass many times here. I find that, these days, Anglican churches are more often than not locked up; even as architectural links to the age of faith, they are falling silent.
What was most intriguing to me, as I drove through Hunsdon, was the distance between the church and house, and the village itself. They are a mile apart. I can imagine that such a heavy Tudor presence in the area would have required the ordinary people to establish their dwellings some distance away.
Posted by Fr Richard Aladics at 16:59