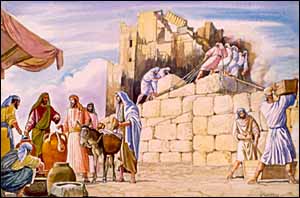 Christianity and the Rise of Western Civilisation.
What took place in the world around the first millennium Bc was that man turned his gaze from human experience to contemplate absolute being. This was true all over the world except for the Hebrews. They made no attempt towards metaphysical speculation, they made no attempt to transcend the temporal and social order, they made no denial of the temporal and historical process (even when they were crushed by it.)
The Hebrew religion and culture had no link with the historic cultures around them,even those that were more developed; their culture had practically no material foundation. And their ethics came from looking away from developed culture towards the desert. The foundation of Hebrew culture was its ritual, whose form came not from the cosmos, but from a personal God. Israel's God, unlike that of all other cultures, was a single God. Yet this single God was not merely God of Israel, but of the whole earth.
Even when Israel was conquered by Assyria, it did not come to share in the fortunes of that nation - as others did, but saw in the material ruin of its own nation, not the powerlessness of God, but his universal and mysterious power - Assyria was merely and instrument in God's hands! Indeed, history was moving towards a consummation and the eternal reign of the Kingdom of God.
The eternal law was not, as the Greeks thought, an ordered cycle, but rather was something that was manifested in the vicissitudes of history. The foundation of things was not that which took place in nature, but rather that which took place in the relationship between God and Israel.
We are witnessing today our culture newly wrestling with this. The modern secular-sceintifc mind is aghast that the laws within the natural world are not the bottom line, and that instead, the truly ruling phenomenon is the relationship between nature and grace. It will be an unthinkable and utter shock to the culture of our day, when the light dawns upon it, that the most real 'law' in the Universe is the relationship that exists between Jesus Christ and the Church.
Posted by Fr Richard Aladics at 11:04