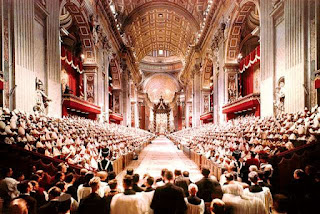 The relationship between the Church and the world has always been a dynamic and a variable reality. Often the Church has had to adapt the ways in which she relates with the world. We saw this take place, for instance, during the English Reformation, when the Church was refined in a most remarkable way. Then, throughout the Modern era, we saw the Church seeking to enable the Christian life in decisive ways. Today, the world (at least in the West) is trying to emancipate itself entirely from the legacy of the Gospel. Not surprisingly then, the Church should not today seek to follow the way of the world, but rather has sought to embrace a new evangelisation. What has also happened is that the world's current struggle has entered into the Church in ways that we have not seen since the Reformation. Within the Church there is a now a polarisation, between being an un-Enlightened Church and being an Enlightened Church, together with the whole range of accommodations that exist between these two poles.
For me, the Second Vatican Council was a intentional endeavour by the Church to re-embrace and to witness to the light that she has received from God - she sought to enable a new evangelising and formative relationship with the world. "Gaudium et Spes", which was the central Decree of the Council about the relationship, is very understandable from the perspective of the Council Fathers, the vast majority of whom were firmly grounded in the Tradition. It was from that perspective that they called the Church to act, rather than to act from a correspondence with the world, in which the Church adopts the attitude of the world.
However, the principal movement which took place following the Council, was the movement of an Enlightened attitude, which sprang from latent and somewhat hidden ranks of the Church, and which took hold of many executive positions within the Church. This attitude then sought to take hold of catechetics and also of new an un-mandated forms of liturgy. In this way, a Modernist agenda appears again in the Church.
Posted by Fr Richard Aladics at 21:11