A time for courage, a time for truth. 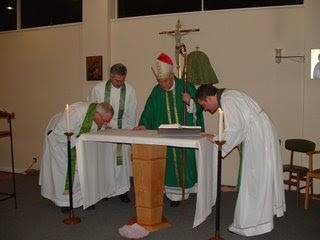 Last week, the Archbishop of Birmingham, Vincent Nichols, stuck his neck out to defend morality against the secular agenda of the Government. We should not only hear and understand what he said, but also give him our support. The subtle but revolutionary changes which this Government is introducing into our country pass many of us by, but this Archbishop is a courageous witness to truth. Here is some of what he said in his Cathedral on the Feast of Christ the King:
"The secular agenda seems to propose that all we need is the clarification of what is lawful. But that is not so. Those who are elected to fashion our laws are not elected to be our moral tutors. They have no mandate or competence to do so. And the wise among them would not wish it, either. Of course, moral laws are more effective when they express the moral vision of a society. But when our moral vision has been neglected, or even marginalised, then the temptation to rely on the law as the moral guide becomes, for some, irresistible. The process of secular democracy in our country at this time, while claiming to act disinterestedly and in a morally neutral fashion is in fact engaged in an intense and at times aggressive reshaping of our moral framework. Think of the notion of the family and the moral equivalence being forced upon us between marriage of man and woman, on the one hand, and on the other, a legally recognised partnership of two people of the same sex. In contrast to this process, there is a profound conviction, shared by all the great religious faiths .... that moral norms cannot be deceided by the ballot box or Parliamentary debate."
We are near the brink! For the next step, which is so close, is for Law to forbid the teaching of truth in public and in private. Where would this leave the Catholic Church? We would not be able to teach many truths in our schools, our parishes, our pulpits, our catechisms, our books. Even our private conversations would hold us in jepardy.
Thanks to Matt Doyle (lacrimarum-valle.blogspot.com) for this picture. I was with the Archbishop recently in Birmingham University Chaplaincy ... and I'm with him all the way!
Posted by Fr Richard Aladics at 07:37

Yes, I do like that picture! Shame about the dodgy altar. I love our archbishop too.

It's a little bit peremptory, isn't it. Fr R