What a flaming liberty! 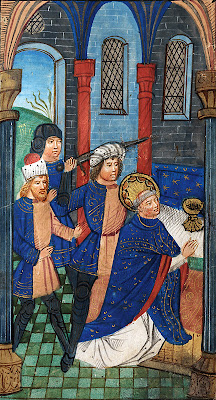 What a liberty that the liturgical terrorists (whoever they are...Bishops, Liturgical Commission) have downgraded St Thomas of Canterbury to a commemoration when it had been a feast since the liturgical reform. St Thomas is the patron saint of the pastoral clergy of England. At a time when we need priests with courage and certainly of their identity, surely we need the prayers of this great saint. Maybe we should have a show of people power and petition the Holy See to make it a feast in England again.

Just reading in the office of readings today the reading from St Thomas' letter shows that he is also a great intercessor and example for the New Evangelisation in this country: 'Many are needed to plant the word, and many to water it.The spead of the faith, the increase in population demand this. God's people of old, who had but one altar, still needed many teachers. How much greater now are the needs of this rich gathering of the nations... But whoever waters or plants, God gives no increase except to him who has planted in Peter's faith, and who has assented to his teaching.'

St Thomas represents the true English fidelity to the Church of Rome, which the English Church exemplified before the cruelty of the Reformation: 'Who can doubt that the Church of Rome is the head of all the churches, the source of Catholic teaching? Who does not know that the keys of the Kingdom were given to Peter? Is not the whole structure of the Church built up on Peter's faith and teaching, so to grow until we all meet Christ as one perfect man, united in faith and in our recognition of him as Son of God?'

Sometimes we think the Protestant evangelicals are so much more successful at evangelising. And it is true that they have many people who they draw to themselves. But often their faith is planted in shallow soil of 'sola Scriptura' - Scripture alone without Tradition. There are many who, for example, are drawn to faith by Christian Unions, in University and by the time they get to their late twenties, life has outgrown this form of faith. We need to be more courageous, and less inward looking. We need to be upfront about spreading the Faith, and bearing witness to it. For the Catholic faith is the rich soil in which the individual faith can grown abundantly. So, the message of the day: Have courage, you have a great message.

PS Don't forget that the Youth 2000 Balham retreat starts this evening at the Holy Ghost Parish in Balham. Do come along if you're in the area. The big evening will be on 31st with the Eucharistic healing service and late night Mass for the new year.
Posted by Fr Julian Green at 15:05

In Southwark St Thomas is celebrated as a feast, probably thanks to the fact that Canterbury falls within our diocese. Whether or not it was liturgically correct, we also celebrated it as such at the Faith Winter Conference at Stonyhurst. We certainly do need St Thomas' intercession and example. BTW: great blog and will link to it in my blog.

Bravo! Courage is certainly what we need to pray to St. Thomas Becket for.