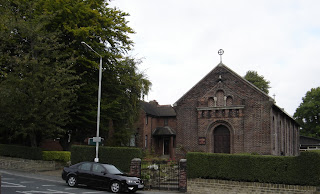 My new placement finds me in Leeds again, or rather just outside the city to the south. This photo shows the church of St Brigid with my house just to the left. Yesterday I named the presbytery "John Paul II House". A whole series of events recently have led me to use the Prayer invoking the help of John Paul II - it seemed that the next step was to place myself and new inititatives, including my presbytery, under his patronage. Fr Julian has already visited my new parish and we held a very fruitful fraternal of the John Vianney Society. 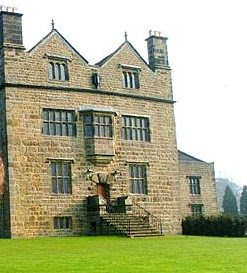 A little to the north in Ilkley, the Elizabethan hunting lodge "Myddleton Lodge" is for sale again. This house, which dates from 1560, and which was the property of the Myddleton's, Yorkshire Catholics during the reformation and later, has been in Catholic hands until 2000. The house has been substantially restored and is for sale at £2.85 million. This house too could be a very good "John Paul II House" for the formation and evangelisation of young people. Any offers?
Posted by Fr Richard Aladics at 14:00

Perhaps you could help me out..there's a trad guy giving info athanasius blog on why we shouldn't pray for the canonisation of JP2..over at my blog...??Not very nice is it?

Yes. Ignore him. Satan can dress up in any clothes he likes, even a cassock, lace cotta and biretta. JP II is by the common voice of the Church a saint, and the process will end in his canonisation. Simple as.