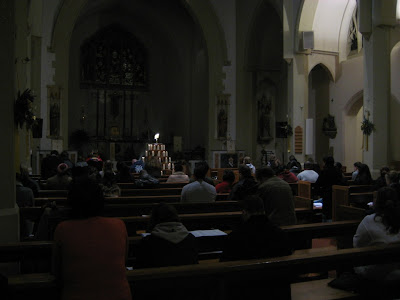 For the past twelve years I have celebrated New Year by taking part in the Youth 2000 New Year Prayer Festival, a wonderful opportunity offered to young people to come away from the empty secular and even pagan celebration of New Year and to enter the new year in the presence of Christ and to honour his Mother whose Solemnity is celebrated each 1st January.
The first Festival I took part in was near Guildford and will remain a special occasion for me because it was there that I first met John Pridmore who was to become a very great friend. Other years the Festival was held at Henley on Thames, Liverpool, Harrogate, Wapping, Winsford and Birmingham, but for the past five years the Festival has been held at the Holy Ghost Parish, Balham. And so, after Christmas in Wharfedale I headed south again to Balham. This parish is unlike many other parishes in the country, having stepped aside from the liberal neo-Pelagianism which has taken root again in the UK, and seeks to reveal instead the living Church, rich in Catholic integrity and identity and focussed on the apostolic mission of the Church today. It is not at all surprising that young people come to Balham each New Year from all over the UK, because they are welcomed by Fr Stephen, his assistant priest and parishioners with great generosity. Indeed, even though this Festival is held here only once a year, the Holy Ghost parish is now a spiritual home for many young Catholics because of the way in which this extraordinary parish helps them to hear the Gospel, to see their lives in the light of grace, to discern the call which God is making to them as individuals and the call He is making to the whole Church. This year the Festival witnessed the arrival of many mid to late teenagers, newcomers to Youth 2000 Festivals - a new generation of young people who are simply and spontaneously seeking to be built up on Christ. An atmosphere of real prayer and contemplation was evident but the highlight for me was the sermon given late at night on New Year's Eve which called the young people to a New Evangelisation. Fr Julian proclaimed a strong message which resonated in the hearts of everyone present. We know that it is the Holy Spirit now who will enable all the hearers of this proclamation to attune their lives to what God wants. And how marvellous is it for all those who come to the Youth 2000 New Year Prayer Festivals, that the message we are given and called to respond to at the start of a new year is the Gospel. 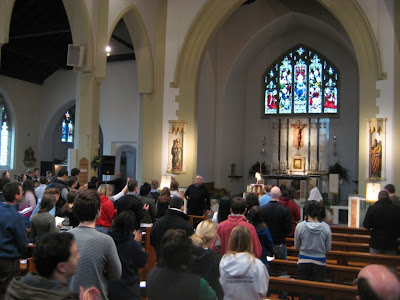 Posted by Fr Richard Aladics at 19:13

Just checked in to see if you are back blogging and you are! Welcome back on-line!

And yes, what a great truth you attest to about Fr. Stephen and the fulness of faith contrasted to the more typical 'liberal - Neo-Pelagian' nonsense that prevails in many places.

He simply gives Jesus Christ and His Church - and acts as a vessel for these rather than getting in the way. And the youngsters love it!

Have a blessed New Year!

In Christ
Alan and Angeline