The sublime to the ridiculous 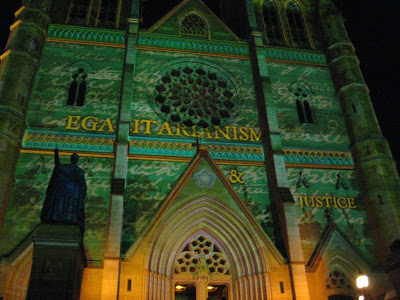 Remember the bizarre film "Elizabeth - the golden years" and how Westminster Cathedral became the set for Philip II's "El Escorial". The secular world just doesn't know how to relate with Catholic churches.
On the Feast of the Sacred Heart while Cardinal Pell was ordaining six new priests in his cathedral, the City Lights Projector was making pretty pictures on its west facade (photo above). While inside the Cathedral a real enlightenment was taking place, outside images of another kind were being projected!
Posted by Fr Richard Aladics at 06:55

I have been thinking about the sublime and the ridiculous thought recently and the certainty that the Sublime loves the Ridiculous seems in many ways to point to the fact that The lord loves each one of us - or is it just God letting me know that I am the ridiculous one? - I don't care as long as He loves me.

Ray, evangelisation is not a peripheral thing. Yes, God loves all, but human beings are called to receive that love in Christ and be transformed by it. Your comment supposes that the mission of the Church is irrelevant. You need to re-assess your attitude here.