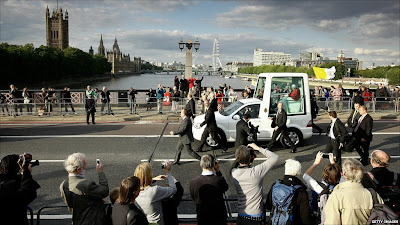 Who among us expected that heart would speak to heart in the way which we have just witnessed. The Holy Father has spoken to Britain and Britain has engaged in a new dialogue. The Holy Father's encounters with the British people at large, with representatives of the State as well as with its Head of State, with the leaders of many Christian communities, with representatives of many religions, and with the Church in Britain; an encounter which, at each step, was thrown into relief by the mass media - yes, the Pope has spoken to Great Britain. Perhaps not since the time of Gregory the Great has such a thing taken place! And this dialogue has been illumined in the most providential way by the Beatification of Cardinal Newman. The Cardinal now stands as a grace-filled advocate for a New Evangelisation of Britain, and everyone who has been a part of the dialogue which the Holy Father has initiated is now placed to be a part of that Spirit-led movement which we call the New Evangelisation.

No one who looks realistically at our world today could think that Christians can afford to go on with business as usual, ignoring the profound crisis of faith which has overtaken our society, or simply trusting that the patrimony of values handed down by the Christian centuries will continue to inspire and shape the futue of our society. ... But each of us in accordance with his or her state in life, is called to work for the advancement of God's Kingdom by imbuing temporal life with the values of the Gospel. (Holy Father's address at the Vigil in Hyde Park.)

Yes, the Holy Father has spoken to Britain (the very place that proclaims the value of dialogue), initiating a new dialogue of faith and reason, and Britain has already begun to respond. A New Evangelisation is underway at last - and who among us could have imagined it. Only God could do this, and the Holy Father has been His intrument of grace. I can hardly believe what I have witnessed!
Posted by Fr Richard Aladics at 01:39

Awesome post. I love the message you are conveying.

Check out my blog? I think it's right up your alley.