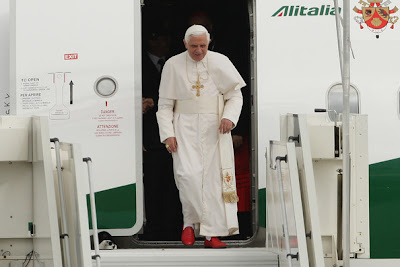 Why is that there should be such anger shown towards the Holy Father from England? Leaving aside the question of whether this is a Media campaign or a widely held attitude from the people of the country, or both; the intensity of the invective against the Pope is quite surprising. Why?
I have been pondering this question from the other side of the globe as I have read some of the views which the Media has been disseminating. Now, I recall that John Paul II in speaking about contemporary secularism, once said that it arose from, what he called, a rationalist prejudice against the supernatural. In other words, rationalism has taken hold of so many people in this age, that they cannot admit even an enquiring mind, a mind that seeks to know, to love, to contemplate, to adore. In such a climate as this, the vision of what life is, is immensly reduced; rationalism and atheistic secularism have so reduced, clipped, trimmed, dulled and oppressed the soul of England, that it now lives in fear of its tiny world being shown up for what it is, and blown open by a greater vision of what human life is about. Today's anger springs from this fear.
What do I mean by the tiny vision of life which England has created for itself? Well, we see this in its extreme use of abortion and contraception, in its excessive focus on shopping culture, in the uncritical embracing of the media and media culture, in the un-thought-out rejection of the Christian life in favour of harsh and violent life-styles and moralities, and in its self-imposed individualism and culture of loneliness. How can human beings live in this culture? No wonder there is terrible anger and fear, now that a herald of the Kingdom of God is approaching.
What a tremendous grace then, the Holy Father's visit is; that in such an era of closedness and darkness, a light should shine. England's fear and anger arises, not from the Holy Father, but from its own inadequacy, its own self-imposed darkness. This is in no way a bad starting point - it's the real story of the human race - and this is why Christ came to us. The gentle herald of the Gospel who approaches will help England as best he can, to see a much greater horizon. England, step out from the darkness, see, hear, breathe and flourish!
Posted by Fr Richard Aladics at 00:38

A very perspicacious article by Fr Richard! The so-called open-minded bearers of tolerance (the entrenched orthodoxy of the secular intelligentsia) continue to contradict themselves by flaunting their elitist contempt and confected moral outrage at the Pope. These stridently anti-Christian voices are given a disproportionately large platform to broadcast their vitriolic antipathy against the Church. Among these voices we find Richard Dawkins, who masquerades behind the authority of science and reason to propagate an atheistic fundamentalism which is clearly philosophical in nature and irrational in content. Dawkins and his fellow anti-Papal combatants would do well to revert back to a more balanced and reasoned perspective on tolerance (like that of Voltaire), instead of colluding with the media to promote their farcically inane crusade against the Pope.