At the centre of it all 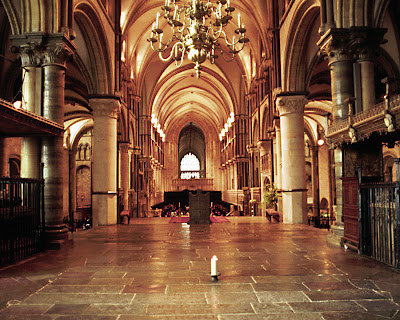 The contemporary debate concerning the relationship of the Catholic Church to the State, and the question of the Unity of Christians usually leaves out the basic truth that everyone is related to the Catholic Church anyway. Attempts to place or categorise the Church always fall way short of the mark and leave people in all sorts of weird postures. There is no getting away from the fact that what we call the Catholic Church is something which has been revealed by God and that it is the pillar and ground of truth in the world.
The division within Christianity in the UK is sadly responsible for this state of affairs in no small way. Where once there was unity of faith and practice, there is now a plethura of idea, opinion and posture, leaving a gaping vacuum at the centre - so evocatively expressed by the wide open space at the architectural climax of Canterbury Cathedral where once Becket's shrine stood (photo above).
The lack of unity has lead Christians down so many paths, many of them obscure, indivdualistic and unhelpfull, so that today we have the rationalists, the fundamentals, the neo-arians, the neo-pelagians, the congregationalists and the sectarianists, to name but a few. Where in all this mix of people doing their own thing does the Catholic Church fit? It is a bewildered age and it is not easy to see the essential nature of the Church; that there is such an entity as the Church, which is the pole and centre of gravity for everyone.
Thank goodness for the Martyrs, who pointed to the Church, and who the Church depended on so much in their day. But the Church does exist, and so the question of the Unity of Christians is a real question, one which will not go away. We are called to unity, and there is an authority in the Church which has the power to govern all of us. So, beyond all the opinions and all the clever ideas about the Christian life held by so many, there nonetheless remains the Mystery of the Church, revealed and given by God, an entity which is the foundational agent of the Christian Life for everyone who is baptised, and the herald of that Life to all those who are not. Without the Church no one would be Christian. What is this Church? It is the Catholic Church, and she uniquely has the responsibility and authority, from Christ, for governing and pastoring all the Churches, which means all the Baptised.
And secondly, that there is such a reality as the Mystery of Faith. We didn't invent it, procure it, or even ask for it. It was revealed and given. This Mystery is the Eucharist; the Mystery of Faith cannot be truthfully described by anyone in any other fashion. So those who say that the Eucharist is only symbolic, or simply a ritual, or "it doesn't matter how you celebrate the Eucharist", or even if you need to celebrate it at all, or that there is no Mystery of Faith, or that it has some other meaning; all these Christians (Catholics included) have a long way to go. The Mystery of Faith is the very core of our being - or at least, it is what everyone is called to have at the core of their being. That God has given Himself to us, and we are called to give ourselves to HIm. This is the Mystery of Faith; it is the very heart of human life.
So, as the Anglican Ordinariate comes into being and opinions are expressed, we need to have the authentic vision of the Christian Life before us - that it is a mystery of grace which God has given us. There are indeed many ways to live the life of Christ, but the Mystery of the Church and Mystery of the Eucharist are realities which we cannot change or set aside.
Let us, with homage and gratitude, be open to a fuller vision of these Mysteries which God has given to the world for the salvation of all men and women.
Posted by Fr Richard Aladics at 05:04