Thanks to the King 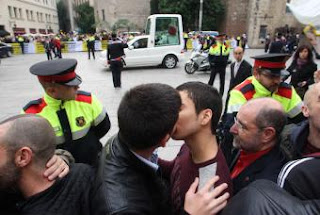 While the Pope dedicated the church of the Holy Family in Barcelona, outside a congress of homosexual men engaged in kissing one another. However, in saying farewell to the Pope before he left Barcelona, the King of Spain Don Juan Carlos expressed, on behalf of many, his thanks to the Holy Father. He said, "in both cities [Santiago and Barcelona] you have blessed us with words of peace and solidarity, of fraternity and spirituality, full of hope for a better world." The gesture of the King was in total contrast to that of those men who so inapproriately expressed their manhood outside the Sagrada Familia church.

The truth about mature manhood is that men are called to take some form of concrete responsibility for the Gospel. Men have the mission to be heralds or bearers of the Gospel. Not all men are called to be priests but the fullness of masculine identity is revealed when men embrace, internalise and express the Gospel. This is true for husbands and fathers, for single men, for working men, for young men who are dating, each in their own way, they become real men when they are advocates of the Gospel. What a great photo (above) of the King of Spain and the Pope, two men each in his own way revealing his responsibility for the Gospel and worthy of the world's gaze. Outside the church, the very opposite of masculine identity was taking place - a refusal to take responsibility, before the world, for the Gospel.
Posted by Fr Richard Aladics at 09:00