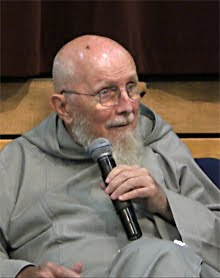 Continuing and concluding my notes from a talk given by Fr Benedict Groeschel CFR in Leeds in 2002, we can begin to appreciate Fr Benedict's own clarity of understanding about the nature of Scripture scholarship during the twentieth century, and particulary the impact of rationalism in the form of the "historical-critical method" of interpreting Scripture, which came to the fore in both Protestant and Catholic circles as a result of the Enlightenment. Fr Benedict in his talk continued to present the problem for the Church which came from a rationalist perspective on Scripture.
-
Today’s Catholic Scripture Scholars have arisen largely from the pro-Enlightenment group. In other words, today’s Catholic Scripture Scholarship is the Enlightenment’s enlightenment of Scripture. And this project does not sit well with Mystery; it is Mystery which makes rationalists ill at ease with the New Testament. The basis of this movement is the idea that the human mind can understand everything, and that we are embarked on an irresistible upward human journey, that science and reason are all powerful. This project, in effect, came to an end with the two World Wars.

A contemporary example of this current is Fr John Meier’s book “The Marginal Jew”, which endeavours to propose that common understanding which Catholic, Protestant, Jewish and Agnostic Scripture scholars would agree about what Jesus said, did, knew and meant. Intending to refine the essential truth which lies at the heart of Scripture. However, asks Groeschel, what is an agnostic, or a Protestant, or a Catholic? But, since no one can really define these categories, how can one determine the essence of Christianity from such vague premises?

No one however, saw the Rationalist impact on Christianity as it was happening, better than Newman. We Catholics tend to know better the devotional side of Newman, yet his clarity of theological vision in the context of the impact of rationalism is most important. (See Fr Bouyer’s book “Newman’s vision of faith”.) Newman speaks about faith submitting reason to Mystery; having faith in spite of the darkness that surrounds me, removing the obstacles to faith so that the mind can believe in God. That Faith is a thankful and obedient experience. That Sacred Scripture are the words of God, and that we cannot therefore treat them like the words of men.

Concluding his talk, Fr Benedict indicated the place from which to start the study of Scripture: that Scripture is given to us by the Providence of God to guide us on the way to Salvation (CCC,107), and that this is the primary purpose of the Scriptures.
-
As an end note, could I just point out that Pope Benedict has, in his Apostolic Exhortation "Verbum Domini", declared that the "historical-critical method" has an important role in Scripture Scholarship, but that it needs to undergo a self-purification in order that it can be uselfully applied to the Scriptures without it adding its own agenda.
Posted by Fr Richard Aladics at 01:39