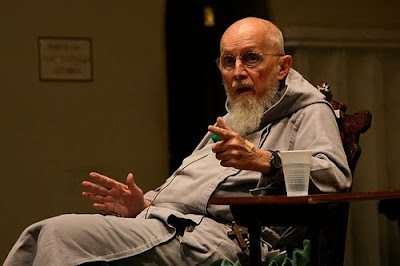 Reading Pope Benedict's new letter 'Verbum Domini' put me in mind of a talk which Fr Benedict Groeschel CFR gave in Leeds in 2002 about Scripture scholarship during the twentieth century. He outlined very simply the origin of the main difficulty - rationalism - which we have had to deal with in Scripture scholarship, together with that attitude that leads to a genuine embracing of the Scriptures. I took notes during Fr Benedict's talk and enclose a summary of my notes here. Acknowledgements to Fr Benedict Groeschel CFR.
-
At the beginning of the twentieth century many Catholic Scripture scholars, people like Loisy and Tyrell had gone into the rationalism of Protestant scholarship and taken Scripture with them. So, in order to protect the Scriptures Pope Pius X commanded Catholic Scripture Scholars to get out of contemporary Scripture studies because of where they were going.

Almost half a century later in 1943 Pope Pius XII reversed the command of Pius X and opened dialogue between Catholic theologians and the Critical Methods that had been used by Protestants and in secular studies of the Bible. In his Encyclical - Divino Afflante Spiritu - he made many cautela and limitations, which as the Catholics moved into academic circles tended to be ignored. But in any case the Catholic Scholars had to enter into this circle with the rules that were in play.

The environment which the Catholic scholars encountered in 1943 was materialistic, sceptical, reductionist and profoundly anti-supernatural. One of its most important protagonists was Rudolf Bultman, whose basic hypothesis was that Scripture exists for preaching (the truth is that this is only one of its purposes), and that you can only preach that which people will believe. For Bultman, modern people do not believe in the miraculous and, he would go on to propose that the miraculous doesn’t even exist. This attitude comes from scientific reductionism, which says that if there is something which you can’t comprehend, pretend that it isn’t there.

Later, Raymond Brown the Catholic scholar, following this tradition, would propose in his book “Jesus, God and man”, that Jesus did not know who he was. In this book he declared that the only words in the Gospel which we know Jesus said are “This is my body”. These words are so extraordinary that they could not have been made up by the evangelists. However, Brown fails to ask how someone who doesn’t know who he is could have said these words, unless he thought he had divine power. The problem which all these exegetes have is a problem with accepting Mystery.

The origin of this whole attitude to the Scriptures is rationalism, which entered into Scripture Scholarship in Germany at the time of Von Bismark’s Kulturkampfe (1871-1878). This was a basically non-political attempt to bring cultural unity to the newly unified Germany. It’s principal goal was to bring Catholics into line with ‘enlightened’ Protestants. By the end of the Kulturkampfe Catholics were divided into two groups: those who embraced the achievements of the Enlightenment, represented today by Karl Rahner (that it is possible to Baptise the Enlightenment, including Kant and Freud, and get something good from it), and those who would not embrace the Enlightenment, represented by Romano Guardini, Karl Adam and von Balthasar.
(To be continued.)
Posted by Fr Richard Aladics at 20:23