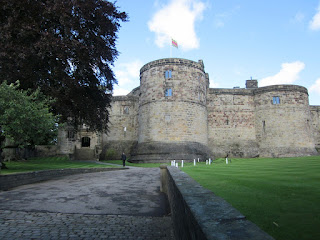 Before the great rains hit Yorkshire and swelled its rivers to bursting, I went over the hills to visit Skipton and its castle. As a boy I had been shown the castle but my interest on this occasion was to see the stronghold to which many of the northern gentry had retreated so as to escape becoming a part of the Pilgrimage of Grace. Here Henry Clifford, the earl of Cumberland and Lord Scrope of Bolton Castle, Wensleydale had taken refuge in September 1536. The small garrison was captained by Christopher Aske, the brother of Robert Aske, who was the leading captain of the entire rebellion. In due course, some thousands of Pilgrims from Richmondshire, North Yorkshire arrived in Skipton and endeavoured to acquire the support of the nobles who were secreted within this formidable stronghold. The Pilgrim host laid seige to the castle for about ten days during September/October 1536 and eventually succeeded in recruiting Lord Scrope to their side. In early October Robert Aske was demanding the presence of this Richmondhsire force at the central muster which was taking place at Pontefract castle, and so the Pilgrim army left Skipton and its castle to its Clifford keepers.
The castle was to become a Royalist stronghold in the Civil War and became the object of a much more serious seige and bombardment by Parliamentary forces. However, once through the south-facing outer bailey gates the castle still commands a sense of its tremendous impregnability (photo above).
The castle's northern face is built upon a towering cliff wall (photo below); it is hard to imagine Skipton Castle being assailed at all from the north. The final photo below was taken looking out of the castle and into the main market street in the centre of Skipton. I couldn't find any artefacts or reference in the castle to the Pilgrimage of Grace, but there is a story that Mary, Queen of Scots, was lodged here briefly before being moved to Tutbury Castle. If you are in the area, Skipton Castle is well worth visiting as it is one of the few remaining medieval castles in England, and is perhaps surprisingly still in very good condition. 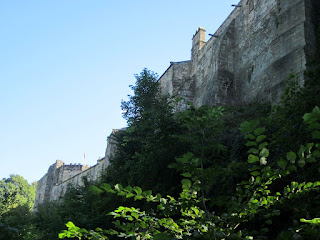 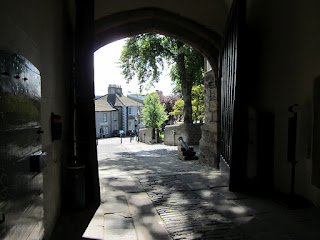 Posted by Fr Richard Aladics at 16:48