Our Lady of Doncaster 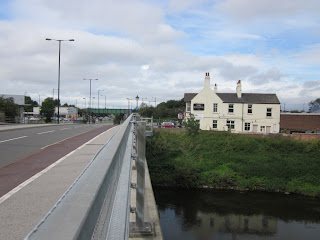 On my way to visit Walsingham recently I pulled off the main route so that I could pass through Doncaster and see the site of the Carmelite Priory which had been one of the pricipal shrines to Our Lady in England. Coming in from the north I stopped first on the (second) bridge over the River Don on the A638. The bridge is modern, but it was on its mediaeval predecessor that, in December 1536, Robert Aske and the other leaders of the Pilgrimage of Grace had met to parly with the Duke of Norfolk. Through the Duke, King Henry VIII had promised to accede to the Pilgrim's petitions, and then to receive assurance that the Pilgrim host would disband. Of course, Henry had no intentions whatsoever of accepting the Pilgrim's petitions and, later the following year after they had disbanded, their trust would end in their being massacred wholesale.
The above photo was taken on the bridge looking north to where the Pilgrim host of about 40,000 would have been mustered. To the south, on the Doncaster side, the Royal army under Norfolk numbered about 4,000 men.
And so, into Doncaster itself. It was a Sunday afternoon when I visited and the town centre was quite busy. I was immediately aware of an austere and somewhat souless atmosphere on the streets. The site of the Carmelite Priory is near the top of the High Street and "Priory Place" runs down what would have been the northern perimeter of the ancient Carmel. Of course nothing remains of the Priory, whose site is now the "Priory Walk" shopping street. Entering Priory Walk from the High Street I could faintly discern that this precinct was the site of the Carmel church and its shrine. On the interior facade of the entrance there are two Carmelite sheilds - all that now denotes the presence of what was once such an important shrine (photo below). 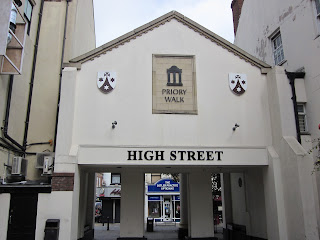 The entance to Priory Walk on the High Street itself conveys nothing of the former significance of this place (photo below). The statue of Our Lady of Doncaster was burned by Thomas Cromwell, along with the other important images of the Blessed Mother, in July 1538, outside his house in Chelsea (Chelsea Manor). A new shrine  of Our Lady of Doncaster has been created in the parish of St Peter's just to the south of the city centre, but if anyone has any historical infomation about the medieval shrine and its original statue, I for one would be glad to learn more.
﻿ 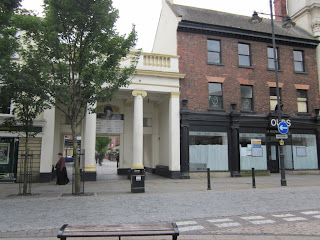 Posted by Fr Richard Aladics at 20:18