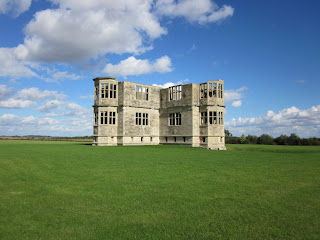 Since my first hearing about Sir Thomas Tresham II I have been a fan; his 3D gestures  (his Catholic buildings) against that hideous tyrant, Elizabeth Tudor, have long claimed my attention. I am speaking about the Sir Thomas Tresham of Northamptonshire, who was born in 1534 and died in 1605.
Sir Thomas was a Catholic and suffered huge fines and a history of interogation and imprisonment for being so. He was also made Prior General of the Knights of Jerusalem in 1557 by Mary Tudor and was knighted by Elizabeth Tudor in 1575. I should like to learn more about him, particularly about his various imprisonments and about where he is buried. Sadly, the old church at Rushton was closed when I was there, preventing me from investigating the Tresham memorials within.
Sir Thomas was a builder and, while in Northamptonshire recently, I went to visit these historic houses. I first called on Lyveden New Beild (photo above), which was begin in 1595 and left unfinished when he died in 1605. The Treshams lived at Rushton in the Manor; Lyvedon was to be their country escape. I don't know that it was ever lived in. From above, the house would form a Greek cross. The continous exterior frieze is laden with Christian motifs. Even the window frames, throughout the house, each represent the cross of Christ. 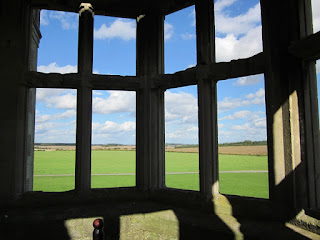 When I visited work had just begun investigating the extensive moated and un-moated Tudor gardens. It was only realised that there had been a sophistocated Elizabethan garden associated with this house when arial photos, taken by the Luftwaffe in 1941 revealing the designs, were examined. The photo below is taken from a Tudor viewing mound, overlooking the moat, towards a field in which there once was a fascinating and richly planted Elizabethan garden. Indeed, there are letters still existing which Sir Thomas wrote from gaol in which he directs, in a detailed fashion, the garden work then being undertaken. 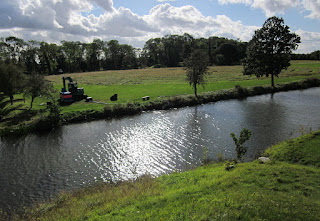 Lyveden New Beild is set is the most lovely open landscape. Were it for sale, I would buy and complete it in honour of Christ and Sir Thomas Tresham. It is now looked after by the National Trust. Ring beforehand to check on opening times.
﻿
Posted by Fr Richard Aladics at 13:36