A glimpse of Lancashire recusancy 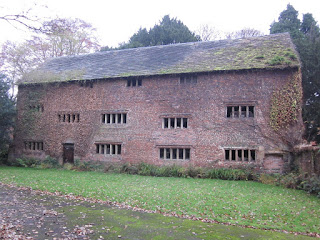 In the grounds of Ince Blundell Hall just north of Liverpool is a remnant of the old Blundell Manor House of Ince. The Manor House dates back to the 1100s but the remaining wing is early 1500s. Robert Blundell, born 1575, was a recusant and established priests in his home,  building a secret chapel (no longer extant) nearby in the woods of his estate.
In 1720 the Blundells began building a new Hall, a short distance from the old Manor, which remained a centre of faith down to the present day. Today the Hall is a home for retired priests run by Augustinian Canonesses. The wing of the old Manor which you see in the photograph is now derelict, but still allows you to see the brick and stones of a house that survived the Reformation and the Civil War with its Catholic life intact.
Posted by Fr Richard Aladics at 16:48

Can the old wing not be sensitively restored or made stable?

With some interest, imagination and money, I'm sure it could.