During this my Silver jubilee year I have been enjoying reading more than ever. In fact, these past three months have been enriched enormously by much that I have read. 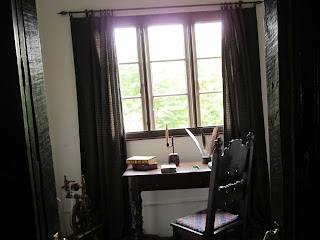 I recommend here some of the books which I have read. And just as a little encouragement I paste a photo of the windowed chamber where Charles II sat with Fr Huddleston on 9th September 1651 in Moseley Old Hall, talking, reading, and watching for the approach of news.
"Secularisation" by Edward Norman. This is an very insightful book which analyses the current social movement from the point of view of Anglicanism. His observations are very pertinent and, when referring to the impact of secularism on Christianity he speaks of how Christians and especially Christian leaders have let go of Christ, in favour of a secular project.
"Tolkien: the making of a legend" by Colin Duriez. I read the Humphrey Carpenter biography many years ago and found this new biography very refreshing, particularly in terms of appreciating the interconnection of Tolkien's own life and the growth of his mythology. Also, for the way in which Duriez speaks of Tolkien's Catholic faith.
"An accidental jubilee" by Alice Warrender. This fascinating account by Alice of her unexpected solo pilgrimage across Europe is utterly engaging. I could hardly put it down. Many congratulations to Alice for her courage in undertaking this journey alone and in the immediacy of her narration.
"Thomas More - portrait of courage" by Wegemer. As I read this book I felt as though the author was someone who had known More personally. This book is very enlightening and inspiring, especially for men.
"How many will be saved?" by Ralph Martin. A thorough theological exposition of 'Universalism' - the way in which we understand God's will for all men and women to be saved. The author has really gone into the matter and shows a whole theological movement; where it came from, where it went wrong and where it is secure. The author has done a great job here for the Church.
"All glorious within" by Bruce Marshall. This novel set in Catholic Scotland during the first half of the last century was, unexpectedly for me, a sort of antidote to recent revelations from the Church in Scotland. It a novel it speaks very intimately to anyone with a Catholic heart, and reveals much about Catholic life for our grandparents generation.
"The essence of prayer" by Ruth Burrows. This Carmelite nun from Norfolk has written a tremendous book about the very heart of Christian living, and has also made the Carmelite experience particularly accessible in the way she speaks about some of the great Carmelite saints. I think that this book really should be standard reading for Catholics.
I have also begun making a systematic reading of the Timothy McDermott edition of St Thomas Aquinas' "Summa Theologiae". All I will say at this stage is, it is brilliant.
There are a number of other books which I have read but which, although I have enjoyed them, are not books that I would particularly recommend. My next book in waiting is George Weigel's "Evangelical Catholicism". I'm looking forward to this one very much.
Posted by Fr Richard Aladics at 12:23

An interesting list.
I can assure you that you will also enjoy George Weigel's book.