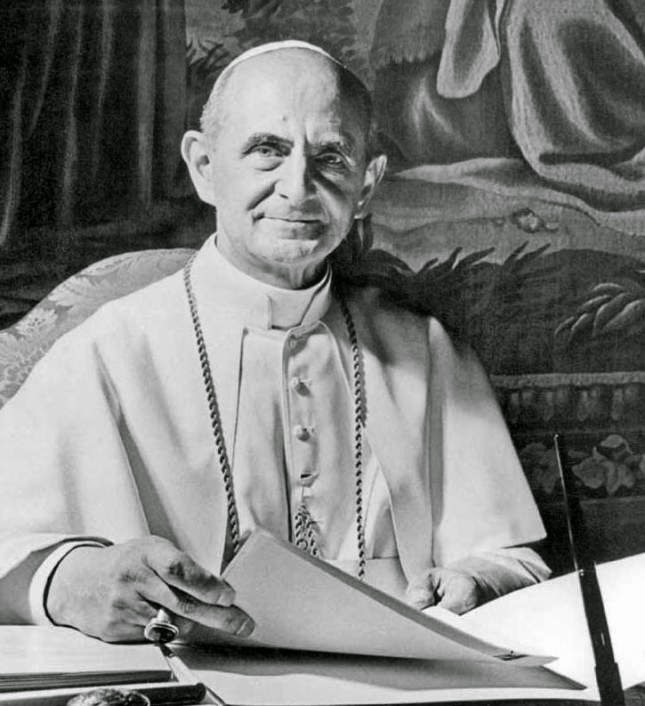 We can't speak fully about Marriage and the Family without speaking about Paul VI's teaching on this subject.
The claim is made by many who speak about the Encyclical Letter, "Humanae Vitae", that its teaching is a matter of conscience. This is merely wordplay, because they go on the say that Paul VI's teaching here is not secure aand that everyone must decide about the matter on the basis of their own conscience.
"Humanae Vitae" is indeed a matter of conscience, the conscience of spouses, and it is a matter of conscious awareness for everyone.
With "Humanae Vitae" Paul VI enabled a huge shift to take place regarding the way in which marriage and the family are perceived. He took the mission of spouses out of the position that it was in - one of being watched and analysed by others - and placed that mission in the exclusive hands of married spouses. In Humanae Vitae, Paul VI establishes anew the mission of spouses in its greatness and uniqueness; they are the only ones who have the mission to transmit human life. It is their mission and theirs alone.
In the Council Document, "Gaudium et Spes", the Church speaks about marriage and the family as one topic among many. But in "Humanae Vitae", the role and mission of spouses is taken out of the arena and entrusted entirely to them.
It is a stunning piece of teaching, in which the Pope relegates to a poor second place all other interests which weigh in on family life in the modern age: governments, politics, medics, teachers and the media. And he elevates, in front of all these interests, the conscience and awareness of married people to the greatness of their mission.
Marriage and the family had never been spoken of before like this. Humanae Vitae paved the way for the extraordinary teaching document on the family of JPII, "Familiaris Consortio". Without "Humanae Vitae" such a lucid understanding of the family could never have come about. Spouses stand before the whole world, entrusted with the mission to transmit human life. Their consciences, before the world, matter a great deal. And so, Paul VI presents the simple basis by which spouses should evaluate their mission in real life. Importantly, he denies the 'voice' of modern contraception methods, as unworthy of the mission of spouses.
Humanae Vitae is the very basis by which spouses and parents are freed for their role in the world and in society. No one else has any rights here.
To say that "Humanae Vitae" is a matter of conscience and that spouses must make up their own mind whether to use contraception of not, is to undermind the mission of spouses, and in a certain sense, to patronise them, thinking that their consciences are not worthy of the light of truth.
Posted by Fr Richard Aladics at 14:11

"thinking that their consciences are not worthy of the light of truth."

I would say that is not just a matter of patronizing spouses, though. The collusion of silence on this subject we see in the Church in our country is also a grave injustice against them.

To deliberately deprive people of the light of truth, especially when we know that they are unlikely to find that truth anywhere else, is to betray our mandate from Christ.

We desperately need bishops and priests like you who are not afraid to proclaim the full truth of God's plan for the family. Thank you for your witness.