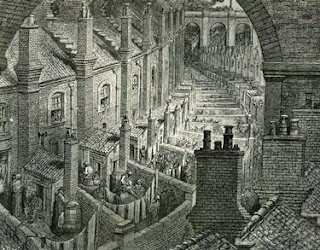 In this age Europe ceased to lead the world, and its own civilization was weakened through national rivalry and dis-union. This instability reached down to the structure of society. No longer did changing, urban, society have as its foundation the stability of rural society, with its natural rhythm and traditional human culture. That which had fed the new urban culture was now exhausted by the strain which urban, artificial culture put upon it. And so, rural society becomes a small minority. The powers of the State and public opinion acted to streamline and bring conformity to the entire population.
In the new “civilization” the conditions of life became more and more artificial as it moved away from the natural rhythm, making increasing demands on people’s energies. The change was not just material but also biological, a change which will affect the future of mankind. Can human beings adapt themselves successfully to these conditions? Can people maintain the energy that these conditions require of them? Will people become exhausted, and an era of social degeneration follow? Will a new form of social equilibrium be scientifically engendered?
Let us remember that the Roman Empire fell because of a sudden change of material conditions. These conditions, the foundation of her power, were the agrarian, peasant life of the soldier citizen. Once the Mediterranean world had been conquered by Rome, a new, sophisticated elite arose who lived by war and plunder, exhausting Rome’s strength. Rome killed Rome; a vast, useless burden broke the back of the Empire.
Yet the Church was in the midst of this, as the Prophets had foretold; and her foundation was neither power, science nor the natural rhythm, but the mystical union of her human faculties with the Son of God.
Today, urban development does not have the parasitic character of the ancient world. Moreover, science has helped to nurture the material conditions of life. But the social changes carry more weight. What our civilization needs today is social and moral unification – a profound human fellowship and sharing in our common lot. The Church’s contribution to this is precisely the New Evangelisation.
Actually, the world, which was a European creation, needs Europe. Neither politicians nor politics appear to offer the remedy. Europe today is waiting for a new Augustus; the emperor who converted the selfish forces of the Empire into agents of peace and world order.
Europe needs to be a place of social and economic co-operation. However, Liberalism, in its project to secularise Europe, has undermined its own foundations and has destroyed the spiritual tradition upon which Europe was built.

Posted by Fr Richard Aladics at 17:51