A myth too far 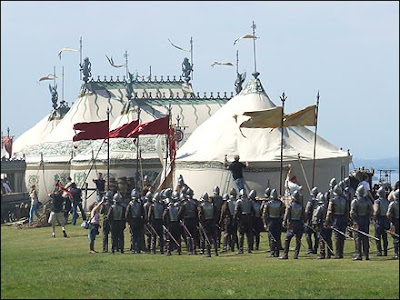 The rewriting of history from an "English" perspective is creaking again under the weight of criticism which has come in response to the film "Elizabeth; the Golden Age". I haven't seen the film, but I have seen so much stuff in the media about it. This is the first time that I have witnessed the Elizabethan Settlement getting a public thrabbering. In Britain we are brought up to understand that the Elizabethan Settlement (a new political order in England in which the Monarch created her own church and in which law could be created independently of truth) was the main righteous player in creating a fairer world at the beginning of the modern age. In order to go with this theory you have to trash the spiritual past of England, claim that the trashing and attempted trashing of so many other States by the English was righteously undertaken (Ireland, Scotland, Netherlands and Spain) and that so much that has taken place since because of this is good. The thing is - we haven't yet recovered from the violence which our State used in the sixteenth century in order to separate ourselves from the great movement of grace. The 'creakiness' of this new film,in its obvious deformation of history and historical characters, seems to be a sign of this. Sukdev Sandu concludes his review in the 'Telegraph' saying "The pity of this botched follow-up is that it never once touches us." The real history of the English will be written one day when we have a clear conscience to do it.
Incidentally, the political intentions of Spain towards England which prompted the Armada, were contained in a letter from Philip II to the Duke of Parma, which he was to open when he landed in England. The letter spelled out three directives for the Spanish invading army:

1. That in England the free use and exercise of our holy Catholic faith shall be permitted to all catholics, native and foreign, and that the exiles shall return.
2. That all places in my Netherlands which the English hold shall be restored to me.
3. That the English shall recompense me for the injury thay have done to me, my dominions, and my subjects; which will ammount to an exceedingly great sum. (This third pount may be dropped; you may use it as a lever to obtain the other two.)

Its very unclear how things would have turned out had the Armada been sucessful.

Posted by Fr Richard Aladics at 17:29