There is something very covert happening here and we should know about it: the media is beginning to focus in on the Christian life in a way which will make Christians, and especially Catholics, feel vulnerable - the secular media is going to intrude into the Christian Life and begin the explain the Faith as a belittling and destructive force. 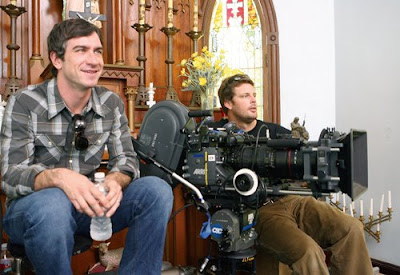 Barry Sheerman MP has taken up the baton in a mild way on behalf of Parliament. Others, such as Richard Dawkins already hold positions, created by the Government, to lead and inform popular media-making in issues related to faith, and especially the Catholic Faith. You can see him, and Sheerman, with others taking part in a TV debate (on Youtube) about the the place and influence of religion in schools. In fact, programmes such as these are very good to watch and analyse in order to see trends taking place in our culture. The media itself also has a 'big handle' on this and we are beginning to see a new phenomenon in TV: cameras entering into Catholic Churches and presenters speaking in a cynical way about the Christian Life. A good example is here. In this video insert you can see presenters, including so-called Catholics, speaking about the Faith in a disparaging way.

You may think that I am overplaying the point. However, over the past couple of decades we have seen the media intrude so intimately into the Family, that it has made families become and feel utterly vulnerable. The media has made society question the purpose and meaning of the family to such an extent that, for many in our society, the family has become an obstacle to the individual's freedom. Freedom of choice, over and against others, has corrupted our understanding of the Family and destroyed its irreplacebale role in society. And this has happened through the incisive and cynical way that cameras and presenters have entered into the privilaged territory of the family. The media has represented the family as an impersonal reality, it has presented false models of the family, especially in the Soaps, it has dominated the family and made it question itself, and it has offered 'the media family' so that living family life vicariously through TV dramas, people can step aside, as it were, from their real life mission.

This same process is now beginning to happen to the Church and its life. So, what you see now on the TV is the start of a concerted effort to make people of faith, and especially Catholics, feel vulnerable and seem out of sink with the general tenour of society today. And we will see the media and its cameras intrude more and more into churches and conciences, presenting them in a cynical and contemptuous way. Look at how the media has damaged families - do not under estimate the immense impact that this same project will have upon the Church.

"The time is sure to come when, far from being content withsound teaching, people will be avid for the latest novelty and collect themselves a wholoe series of teachers according to their own tastes; and then, instead of listening to the truth, they will turn to myths." (2 Tim 4: 3-4)

We need to be aware of this, so that the pagan media doesn't cloud our own vision, and so that we are able to respond directly to every instance where the media will play-down or distort the Christian Life.

Posted by Fr Richard Aladics at 12:10

Anon for obvious reasons: I have to prepare a lesson on "The reconstituted family" for a class of 14 year olds in a Catholic school. The reconstituted family - mum/dad plus the new lover (doesn`t specifiy male or female) plus their kids and whatever kids they`ve inherited from any other one night stands. The RF is to be presented as every bit as valid as the "Nuclear family", which is apparently in the minority now anyway.

This year did anyone notice that we did not have FAMILY Fast Day from CAFOD, but LENT Fast Day.

These people don`t even want you to have a family anymore.

Look at the quotes on the BBC news page you link to in your blog piece. Fr Gerald O'Collins, who I thought was a renowned theologian, is saying - if he is being correctly quoted - that the problem of fewer confessions is because priests are seeing it as an individual issue and not a global one. This is arrant tripe.

I`m sorry, but I am beginning to feel like a complete stranger here on earth.

And most of all, what I don`t comprehend is how that list of "new" sins can have come out without the Pope's authority. He clearly has had nothing to do with it. So I think what we should be asking ourselves, is how serious are the attempts at the moment to undermine him and possibly get rid of him.

Anon. Tell your pupils about RF, but tell them also about the Family. Without this, RF doesn't have any meaning and also shows it up for what it really is. Your pupils will be aware of the claim that truth makes on them.
As for the new deadly sins; this is a media misrepresentation. The archbishop was not re-writing the nature of sin but identifying modern evils in which sin can be located.
I'm don't think that there are attempts to remove B16 and, in any case, he has the hand of God with him.

Have a look at this article from the BBC as well, although this time talking about the Church of England.