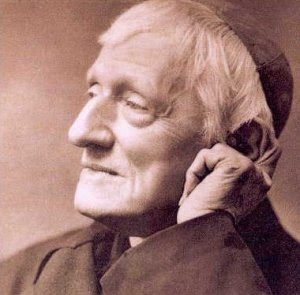 In summer of 2000 I took part in Bioethics Conference at Cambridge; during a presentation by Fr Dermot Fenlon of the Birmingham Oratory I took some notes.
Newman foresaw the loss of Christianity in England and the temptation to decide what the content of morality should be. Newman didn't call this secularism but intuited that the time would come when religion would no longer be the common bond of society, and that such a society would found a new morality.
In order to counter this possible future Newman said that we should see supernatural excellence in Catholics.
However, as we have seen Catholicism in the West has collapsed becuase Catholics have actually sought a religion of utility. At the heart of this crisis is the undermining of the Sacrament of Marriage by contracepting spouses.
Now that the secular world is here, man has created a new image of himself, a new way of looking at himself, a way that reflects his needs. However, there is a much more radical way of looking at human life: the Gospel, which looks at humanity from the perspective of all that is good and true.
So, the moment of decision has arrived: will men and women accept God's truth or not? It is in such a moment as this that man's true end should be recognised. In other words, it is God and the Culture of Life that opens the door to real life for the men and women of our age, and there are three tactics we should use:
1. Lead people to ask the right questions.
2. Teach the truth.
3. Develop and protect the full truth about marriage.
Posted by Fr Richard Aladics at 15:45

fr Dermot gave a talk on Newman & conscience on Saturday which I hope to have the script of soon. It was excellent. I enjoyed your post.