In this second post about the New Evangelisation of England I would like to focus on something which Cardinal Ratzinger said in his address to Catechists in Rome during the great Jubilee. (The full text is available on http://www.communityofgrace.org.uk/) He spoke about the principle of the Mustard Seed; of how the New Evangelisation was not going to be expressed by large numbers of people thronging to our churches, but by individuals and small groups responding to the Gospel. In fact, the most important dimension of the New Evangelisation is personnel - people. 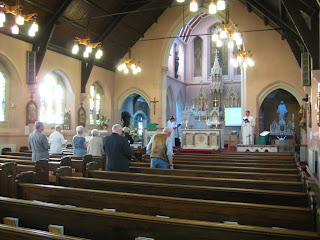 My own experience of parishes in recent years is twofold. I have experienced communities whose focus is their own part in the life of the parish, they are exclusive and essentially neo-Pelagian - their parish is active but is the project of their own lives; Christ figures little. I have also experienced communities which are essentially groups of individuals who come to Mass, for some the Mass is genuiely important, for others there is a note of mere convention and of superstition, but for whom there is no further desire to engage with the life of the Church. In both instances I have found a real closedness to the reality of the Gospel and the Life of Grace. And in both instances I have found myself, as a priest, being looked to only in an administrative capacity - to provide copies of Baptism Certificates and to countersign Passport Applications.
However, in both instances I have encountered indivuduals, groups, a family, a group of families who are open to the Gospel and the Life of Grace, and that these individuals are actually engaged in the building up of the Church in real ways - through prayer groups, organised times of recollection for adults or children, genuine catechesis, family days etc. And that it has been immediately obvious to me who these people are because of certain signs: not only do they go to Mass but they pray, they go to Confession regularly, they have regular times of Adoration. Here is the lived out principle of the Mustard Seed, and here I have become very engaged as a priest in a parish leading and accompanying people in the Life of Grace.
What this tells me is that parishes are not spiritually alive as they should be. Indeed, many operate at the most minimal level - by providing a means of fulfilling the Sunday Obligation and offering the Liturgy in the most banal way. On the other hand, priests and people who are engaged with the Life of Grace seem to be so because they have been "switched on" either by a special grace or because they have sought God out through taking part in some special event - a pilgrimage, a retreat etc. And what is also apparent to me is that these "Mustard Seeds" are giving life to the Church through their witness and through whatever endeavour they are engaged in.
So, whatever else I could say about the need for personnel to help engage with the building of the Church today - this is how it is actually happening.
Posted by Fr Richard Aladics at 10:30

Sorry, didnn`t you realize, Fr Richard ? Glorified administrator is the new Role of the Priest.

The Priesthood of the Laity which has been preached unceasingly from the pulpit over the past ten years (conservative estimate)has finally caight on.

However, a few of us have engaged the true priesthood to come and say MAss in our homes and communities. (and even to expose the Blessed Sacrament, Thank God.) It feels really uncomfortable yet unavoidable. I am just no good at woodwork or left-wing nutty ideology and wondering if I need to construct some 2009 priest hidey-holes. I do hope not..however.... does anyone have any Nicholas Owen style plans ?? ta. everso..

any thoughts ? Needs must.