The new Pentecost in the Southern Land of the Holy Spirit

We have been witnessing, these days, the second great Apostle of the New Evangelisation bringing the Church together in Sydney in order to hear and embrace the great call to announce Eternal Life. 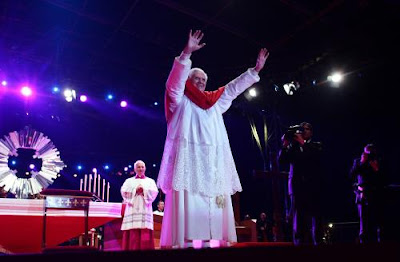 We can neither understate nor preconceive the effect which WYD will have upon the Church in Australia and the young pilgrims from other lands who took part in this celebration. The New Evangelisation is actually taking place there. Pope Benedict's words about the power involved in this Movement leave no doubt: 'It is the power of God's life! It is the power of the same Spirit who hovered over the waters at the dawn of creation and who, in the fullness of time, raised Jesus from the dead. It is the power which points us, and our world, towards the coming of the Kingdom of God.'
Indeed, the New Evangelisation is like Pentecost - that the Church of the Heavenly Jerusalem is being formed here and now on this planet, that the Culture of grace is being fashioned in human hearts, that a person's true identity is Christ!
I am overwhelmed to have been asked to go out to Australia at such a time as this!

The first Christians were stirred by the Holy Spirit to believe in Christ and to proclaim him as the world's only Saviour, sent by the Father. In every age, the true agent of renewal and evangelization is the Holy Spirit, who surely will not fail to help the Church now to find the evangelizing energies and methods needed in rapidly changing societies. Nor will the new evangelization fail to bring to the peoples of Oceania the wonderful fruits of the Holy Spirit as experienced by the first Christians, when they encountered the Risen Lord and received the gift of his love which is stronger even than death. (JPII, Ecclesia in Oceania)

Posted by Fr Richard Aladics at 16:35

I'm from the Christian Blog and Web Awards team at Premier Christian Radio.

I came across your blog and think you should enter it in the competition - see www.christianblogawards.com for more!