How nice it was to have had my first visitor to Sydney from England. As you have read and seen from previous posts, Fr Julian came out to Sydney to take part in the SCENE Congress. I marvelled at his courage and tenacity in making that return journey within the space of just nine days. However, once here we were able to join in fraternity and offer ourselves to the Congress as the entire English Section of the St John Vianney Society. Of course, I was delighted to share some of my experiences of Australia with a friend from back home, and to work together again in the Sydney Congress as we have done so many times before in England. 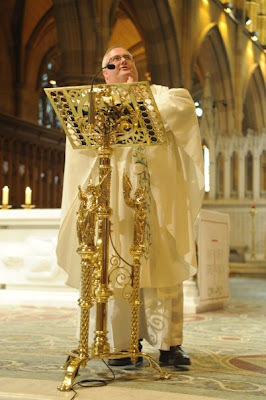 The photo shows Fr Julian preaching in the Cathedral in Sydney at a Congress Mass on the Feast of St Mary Magdalene. In this sermon he spoke about how the Magdalene is a model for us today in the New Evangelisation. He preached twice during the Congress, gave one Workshop on Paul VI's letter "Evangelii Nuntiandi", shared another one with me on "The Priesthood in the New Evangelisation" and took part as a panel member in the Congress Forum. His interventions in the Congress were very well received by all the delegates. These days were days of grace for both of us, given during this Year of the Priest, to strengthen the fraternity in which we both share - a fraternity separated presently by the huge distance between the UK and 'down under', but now brought together again by the New Evangelisation.
Posted by Fr Richard Aladics at 09:08