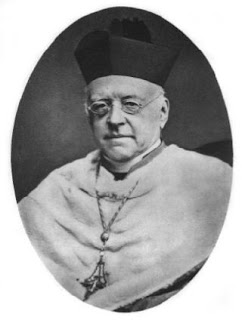 I have recently enjoyed reading the remarkable Autobiography of Archbishop Ullathorne, one of the last Vicars Apostolic of England and the first Archbishop of Birmingham. Previous to these posts he was first Vicar General to the whole of Australia for eight years, 1832 - 1840. What an extraordinary appointment! Before ever there was a Bishop in Australia, Ullathorne was given ecclesiatical authority over a continent whose size is larger than the greater Europe!
William Ullathorne was from Pocklington in East Yorkshire and although I am a native of Hertfordshire I have spent much of my life in Leeds and so align myself somewhat with him. My experience of coming to Australia bears little in similarity with that of Ullathorne except in the essentials - he and I came here on mission as priests. (Indeed, the Annuaire of the St John Vianney Society states that I am en mission en Australie.) Ullathorne's experience of being on mission is Australia was very challenging. He arrived just fifty years after the founding of the colony; the convict system was firmly in place and his ministry was largely with convicts. My experience has not been like that - indeed, I have been inserted into a very vibrant Church and been received by a very warm and hospitable people. Ullathorne is a much more important figure in the Australian Church than I will ever be and he is a great witness and model to priestly life and ministry. Ullathorne lived at a time when the Church in England was very aware of being on mission, and his being sent to Australia is a sign of how missionary the English Church was back then. My sense of the Church in Sydney is that it is aware of the need to really embrace that attitude and identity - being a Church of Mission.
A very remarkable detail from Ullathorne's life was the visit he made to see Fr John Vianney in Ars in 1854. He went to seek the counsel of the saintly Cure and spoke to him about how difficult is was to evangelise England. St John Vianney, listening, sat with bowed head. When Ullathorne finshed speaking he at last looked up and said "Ah yes, but that will not always be the case." Let's hear it for the New Evangelisation! Australia, I think, has the lead on England today.
Posted by Fr Richard Aladics at 06:02

Ullathorne's autobiography is an extraordinary document. (The title is "From cabin boy to archbishop".)

It made me wonder why bishops of the 19th and early 20th century were so devout and manly, compared to ...

Because their focus was mission.