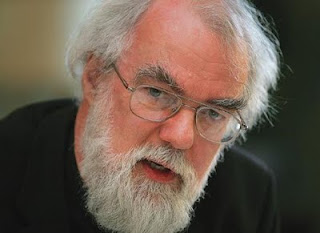 The lecture delivered, by Archbishop Williams, at the Gregorian University in Rome two days ago reveals the myth under which much of England has lived for almost half a millenium. Telling the Catholic Church that its refusal to ordain women is an abstacle to Christian unity, is a living sign of just how far gone is the English myth. A myth created by Elizabeth and her father, and embraced by the whole establishment: that the English way, which we have devised for ourselves, is right and proper, just about the best the world can offer, and that everyone should think of giving it a go.
I wonder how God will get through to England again!
Posted by Fr Richard Aladics at 05:12

I think any Anglo-Catholics who remain in the Anglican Communion now need serious 'help'.