Led by the Spirit 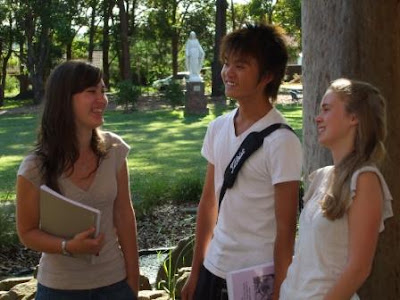 When I was a student in the very early 80's the question of being a student of Biology who happened to be a Catholic was something that really did come into focus. As a student of Biology I was part of quite a large and varied group of similarly aged young people. As a Catholic I was, by and large, on my own in that group. Yet, I saw both these dimensions of my life as important and endeavoured to fully embrace both. It was a rich mix and, ultimately, a vocation was discerned and I quietly left Biology behind for seminary formation in Spain.
For most students, whether Catholic, Christian, other faith or none, the University or College offers an intellectual pursuit whose context is broadly secular. Only a minority of Colleges offer a context for study in which the intellectual pursuit is set within the context of the deep foundation of the person in his or her dignity.
Campion College espouses the Catholic vision of formation; a project of integral formation of the person, who ultimately (and immediately) is led by the Spirit. A person is someone who acknowledges that he or she is in God's hands.
Being a student of the Liberal Arts here at Campion does not simply mean that a range of "classical" studies are followed, but that the call to enter into a deeper relationship with Christ, who has a mission to the world and to the Universe, is also acknowledged and engaged in. This is the essential ingredient of the being of a Catholic student.
At Campion College this ingredient is expressed in a rich variety of ways. First, students and staff share their time and their lives, at meals, in conversation, in discourse and in leisure. Secondly, whilst studying we are also at prayer; this is a College at prayer. Not during lectures of course, but communally and individually, we seek Christ's company. Thirdly, the schedule of the College's day, week and semester allows for a rich engagement of the College community with life, through study, friendship and the many opportunities for reflection.
The heart of the College's life is the celebration of the Liturgy. There are periods of Adoration of the Blessed Sacrament and there exists a level of Christian sharing and of witness to Christ, both on and off the campus, which enables us to make a sincere offering of ourselves to God during this privotal period in our lives.
Being led by the Spirit; knowing that you/we are in God's hands and that He is actively building up our lives, is the very greatest way of embracing student life. How great Catholic learning is, and how great it is to embrace this vocation during the few years that a person is able to engage with it.
Posted by Fr Richard Aladics at 03:22