A culture of opinion 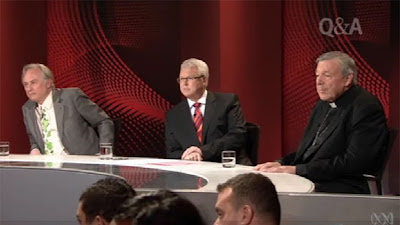 It is hard for atheism to speak about its point of view without refering to God. Again, Richard Dawkins, on the prime-time viewing spot 'Q and A', debating the question of God's existence with Cardinal Pell, tried courageously to defend the atheist position whilst speaking about God and Revelation.
What became manifest during the ABC programme was no so much atheism, so called, but rather the agenda of contemporary secularism. Dawkins himself nicely expressed this form of secularism, a secularism which promotes the leading of worthwhile lives, making the most of our short lives here, making the planet as good as we can, and hoping to leave it better than we find it, whilst aggressively refusing to admit the God of Revelation, Jesus and the Church. At the same time contemporary secularism reveals itself to be a culture of opinion, whether these are well articulated, as in the case of Dawkins or whether uploaded from viewers kitchens using their iphone (as we experienced during the programme). All the while, the pseudo-intellectual mass media, through its agents, taking great delight in trivialising some of the most important human questions, and trying to belittle humanity and its relationship with God. And at the centre of the debate a courageous prelate of the Church making himself available to people to listen to them and to try to answer their questions.
Contemporary secularism is like paganism of old. The Church has encountered this attitude in every era; at the Areopagus, in the Colosseum, in the cities and in the country tribes, in her Universities and in her hospitals. And in each case what is revealed is the spiritual battle which the Church has been called to take part in. It is a real struggle, for in every age, men and women do not want to step out of the kingdom of the world, which is the kingdom of sin and death, and of Satan. What will it take for the men and women of today to step into the Kingdom of Christ, of grace and righteousness?
The 'Q and A' debate on Monday evening told us nothing new about the world (to which we have all belonged), but it did speak about the greatness of Christ's Redemption, about what He has delivered us from, and about the reality of the spiritual warfare today between the world and the Church. It is a warfare which goes beyond both opinion and deliberated argument, because it is about whether we will allow ourselves to be delivered from the kingdom of death and brought into Eternal Life.
Posted by Fr Richard Aladics at 05:23

This all reminds me of the John Lennon song: Imagine. A world at peace because of no religion, no heaven, hell or God. Problem is, it all sounds nice, but it doesn't exist in reality. The philosophies of the 19th century that expounded these ideas showed that they just create evil (as we saw in the 20th century). If people (as christians believe) will only be happy in God, then only God can supply us with true peace, love and happiness. Talk is cheap Dawkins, why don't you just start doing it? All we hear fom you is hated.