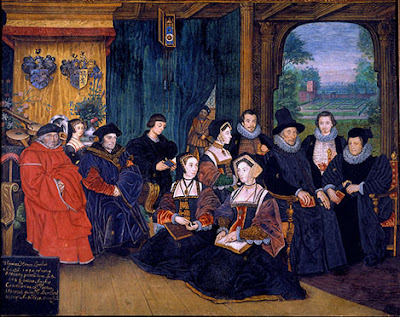 In reading Fr Peter Milward's excellent book "The English Reformation, from tragic reality to dramatic representation", Oxford, 2007, I was struck by the way in which the author referred to St Thomas More's household at Chelsea.
In the midst of the swirling controversies of the English renaissance/reformation, Sir Thomas More quietly and simply built up a Catholic culture around his home. The principal agent of this Catholic culture was simply hospitality. The many visitors who passed through the house, the meals, the many gatherings both informal and semi-formal, the conversations, the prayers which were led, were all able to be cast in the light of truth, the light of the Gospel, a light which was fast fading from early fifteenth century England.
What a patron to have if you are trying to build a Catholic household today. Again hospitality is the key. If you have a television, get rid of it, or unplug it and put it in the garage. Marginalise the computer and the iphone. The family table is second to none in terms of offering you a focus for hospitality. If there is a visitor in the area who has a particular gift in terms of the faith, invite him or her, and invite others so that more can be made of the gathering. You could think of organising, from time to time, particular events; a prayer time, a formation session, even a simple coffee morning. Let there be some focus on Christ and on the faith, but let in be a true social gathering, and let there be some prayer.
It is a good thing also, to consider building up a Catholic library in your home. With the culture taking a nose-dive, good books will disappear from the few book shops that are left, nor will they be referenced in any way by the culture. There is such a weatlth of great books, and somebody needs to preserve this heritage. Now is the time to act. Ask the Holy Spirit and St Thomas More for inspiration and direction.
Posted by Fr Richard Aladics at 06:00