The Catholic house of Oxburgh 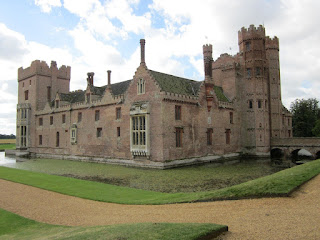 After visiting Walsingham I headed south to see Oxburgh Hall. I passed through the village of Grimston, about fifteen miles south of Walsingham. It was here towards the end of 1588 that Fr John Gerard SJ began his priestly mission in England. He was aided by the Yelverton family of Grimston, and through the Yelvertons he met Thomas Bedingfield of Oxburgh Hall. I don't think that anything of the Yelverton Manor of Grimston still remains, although 'Manor Farm' in the village is probably a part of their former Estate.
Oxburgh Hall is about ten miles south of Grimston; this was my second visit to the Hall, although I had forgotton how magnificent this house is. One's first sight of the house on entering into the gardens is quite stunning - the moated Elizabethan manor is a fabulous sight. Although the house and gardens are now administered by the National Trust, the Bedingfield family who have always been Catholic, still live in a part of the house.
The manor houses some impressive embroidery which was made by Mary, Queen of Scots, while she was imprisoned in Tutbury Castle. These pieces of embriodery have been sewn onto a bed hanging and are a one of Oxburgh's treasures.
For many, however, me included, the main treasure is Oxburgh's remaining priest hole. It is one of the best preserved priest holes in the country and is almost certainly the work of St Nicholas Owen. The hole was made in the early 1590s while Fr John Gerard was ministering in Norfolk. 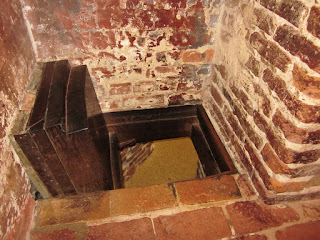 The hole is within the masonry of the left-hand turret of the gate-house. It's pivoting entrance, so well fashioned, is surely the work of Owen. A guide who was on site to introduce visitors to the hole invited me to climb inside. I prefered however to lower my camera down into the hole and take pictures. The below photo shows the inside of the hole, complete with bench and, in the masonry above, a feeding hole. I am not aware of any documentary evidence which speak about the hole's use during the recusancy era. 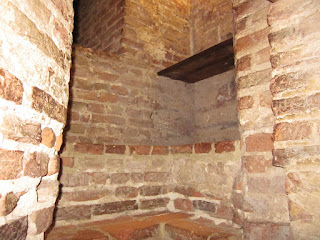 Another entrance to the hole is through the narrow passage which you can see in the above photo. This entrance/exit lead through to a narrow corridor in the top floor of the house on which there was a room where Mass was celebrated in secret. Sadly this room is off limits to visitors.
It is known that there was another priest hole at Oxburgh. This was thought to have been associated with the Great Hall of the house. From the photo below, taken from the top of the gate house turrets and looking across the central courtyard, you can see where the Great Hall used to be. Sadly it had to be taken down in the 1800s because of its state of deteriortion. 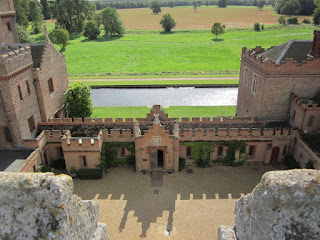 Oxburgh Hall should definitely be on your visiting list; it is wonderful and is a tremedous site of Catholic faith and life in the Norfolk region. Check the opening seasons and times beforehand so that you don't have a wasted journey.
Posted by Fr Richard Aladics at 09:02

Dear Father,
Thank you for this entertaining and insightful blog.
I have a few questions.
1. Next summer my family of five is traveling to Norfolk. We intend to see the Catholic sights in London and then go to King's Lynn. We want to walk form King's Lynn to Our Lady of Walsingham shrine. We would love to visit the Hall at Oxburgh. Is it possible to attend a mass at the Chapel of the Immaculate Conception and St. Margaret? What about mass at the local church St. John the Evangelist?
2. I am a teacher and part time writer for the National Catholic Register here in the United States. Please go online and you are welcome read the articles I have written about Catholic places form Berlin to my home state of Connecticut. Search under my name, James Carmody. I would like to do a story about the Catholic History of Oxburgh Hall. Could you put me in touch with or tell me how to find the son of Sir Henry Edgar Paston Bedingfeld who is a Catholic priest?
3. Can you recommend any books or websites that would serve as a resource about Catholic homes or mansions such as Coughton Court that are open to visitors?
Your blog is giving me much to think about as we prepare for our trip to England during the summer of 2017. Thank you!

Dear James,
Thanks for your comment. Norfolk is a lovely County and a walking pilgrimage from King's Lynn to Walsingham will be lovely. Do pass the Red Mount chapel in Kings Lynn. This was a pilgrim chapel for the shrine in Walsingham dating back to the early 1500s. Also do see the Catholic Church in Kings Lynn, which has the first shrine to Our Lady of Walsingham built after the Reformation.
I don't know about Masses at Oxburgh Hall. I suspect that Mass will only be celebrated there if a visiting priest comes with a group. I don't know about St John the Evangelist church, or about the current Bedingfields.
Your best resource is the Internet, Each historic house will have its own website. As for books, I don't know of a comprehensive guide to Catholic recusant houses, but Michael Hodgetts' book "Secret Hiding Places" about priest holes is superb, and will indicate many of these houses.
Yours, Fr Richard