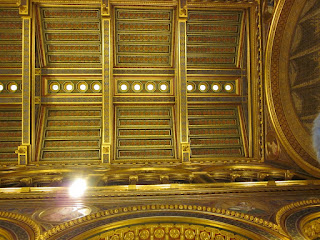 My Silver Jubilee pilgrimage to Rome was lovely. Of my four visits to the Eternal city, this visit will stand out. I stayed just four nights, which gave me three full days to get around. I had intended to visit certain places during those days and my hopes were more than sufficiently rewarded.
I visited the altar and tomb of Bl John Paul II, the shrine of St Benedict Joseph Labre, the shrine of the apostles Philip and James, and I was able to venerate the relics of the English Martyrs at the English College. I was able to do much more than this in those three and a half days, but I would like to comment here on my visit to the chapel of the English College. I took the above photo of the restored ceiling of the chapel, which together with the columns and the mosaics of the chapel's interior, is the most marvellously adorned shrine to the English Martyrs that I have ever seen. The whole chapel is like a gilt casket to house the relics, which are themselves kept in a bronze chest under the altar.
I am very grateful to the deacon of Shrewsbury Diocese who attended to me and enabled me to venerate the relics. He initially struggled to open the relic chest with its cumbersome mechanism. However, I found this extremely moving; as though the door to the relic chest was itself aware of the greatness of what lay within. Both of us were sitting on the chapel floor by the altar as slowly the chest's door swung open.
The deacon very carefully took out each of the reliquaries, one by one, for me to hold and venerate, until we were both surrounded by these treasures of the Church - the relics of some of the greatest saints from England. Each of the names that identified a particular relic, and which I read out, were familiar to me - Becket, Sherwin, Campion, Lockwood, Bell. And suddenly, under this glittering canopy, I was humbled and honoured by these relics of such a cloud of witnesses surrounding me on the sanctuary floor. These were they who stood with Christ in the severest storm; these are the great lights of the English Church.
For a few moments both of us were silent amidst this array of the most precious offerings to God. I offered a prayer in that moment, in their company, for the Church in England and Wales, for her priests and for her mission. I was impacted, in a way that I had not expected, through the presence of grace in this multitude of martyrs.
After a few moments we carefully, one by one, placed the reliquaries again in the bronze chest and, as we did so, it was as if a veil fell once more and the dazzling brightness of the mystery of the martyrs' self-offering to God shone with a softer light.
I will never forget those minutes I spent on the floor of the English College chapel with the relics of our martyrs. Thanks again to the Shrewsbury deacon who enabled me, in my silver jubilee year, to have such a tremendous encounter with these towering witnesses to grace.
More posts to come from my Roman visit.

Posted by Fr Richard Aladics at 22:13