A week in the life of the New Evangelisation. 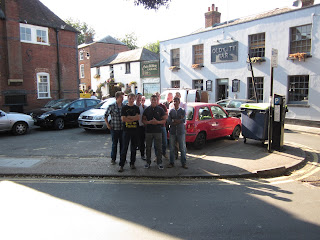 Last week I was in Kent giving formation to the new Mission Team of the Vocations Centre in Whitstable. It was the inaugural week for this new team which Fr Stephen Langridge is developing at the Southwark Archdiocese Vocations Centre. The year will be a year of discipleship and mission for the members of the Team. It was a great joy and honour for me to have been with them in their first week. My part in the week was to help them settle in by offering some foundational formation and by endeavouring to nurture their vision of the New Evangelisation. They will be engaged in evangelisation activities throughout the year and we look forward to hearing more about them on the Southwark Vocations Blog.
The above photo shows most of the Team, together with Fr Stephen and Fr Gerry Sheehan, who joined us for an afternoon visit to Canterbury. We visited the church of St Dunstan, where St Thomas More's head was buried by his daughter Meg, and later, the site of the gallows on Oaten Hill, where this photo was taken. Here on this site three priests and one layman were hung, drawn and quartered for their Faith, on 1st October 1588. We  prayed here together for the intercession of these four Blesseds for the mission today.
Another newcomer to the Vocations Centre, one who became an instant focus for the new Team, was the puppy Nemo. He even tried out his baby-teeth on my fingers! I imagine that the next time that I see him he will have forgotten me but will have become another great supporter of the New Evangelisation. 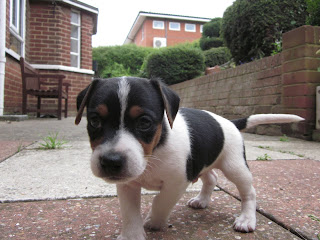 Posted by Fr Richard Aladics at 13:55