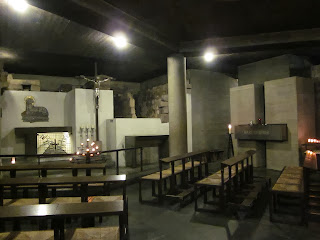 During the SJMV summer session in Kevelaer we had two trips to nearby places. The first was to Xanten, the town in which St Norbert was born. It is here in the crypt of the Cathedral (photo above) that the mortal remains of Blessed Karl Leisner are buried. Karl Leisner, then a deacon, was imprisoned in Dachau Concentration Camp, and there in 1944 was secretly ordained priest. He died of TB only a few months after the liberation of the camp in 1945. He was beatified by Pope John Paul II in 1996. 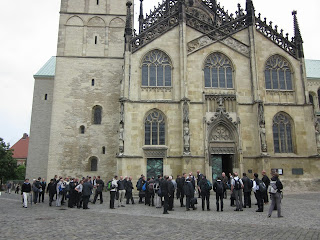 The following day we visited Munster, the See of the bishop Clemens August Graf von Galen, where the Cathedral holds his tomb. 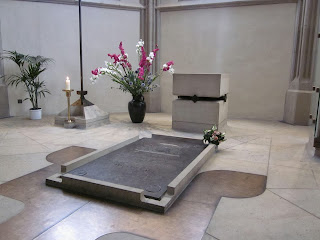 The way in which this courageous bishop preached against the Nazi regime is now famous, and we were able to see the pulpit in the church of St Lambert from which he denounced the crimes of the Nazis. He was beatified in 2005 by Pope John Paul II. 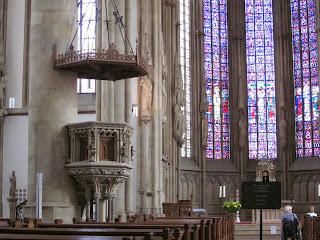 The following day we celebrated the feast of St Teresa Benedicta of the Cross (Edith Stein), Mgr Guy-Marie preaching about her witness.
These three days of our session together produced a most extraordinary resonance in us; to be touched by the example of these three saints who, in their day, resisted the prevailing culture and who lived and died in order to build, with Christ, the real culture. What was so impacting was to have made these visits with this group of priests, who conscious of the falseness of today's prevailing culture, are living in such a way as to help engender anew the real culture, the culture of grace - the Civilisation of love. May the vision of how we are to live today in the face of a prevailing culture which is destructive of human life become the heart of the New Evangelisation of Europe.

Posted by Fr Richard Aladics at 06:13