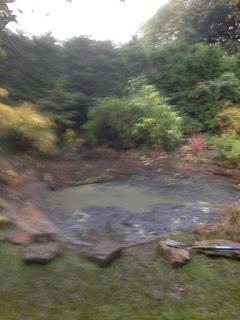 Next day,16th October 2015, Rob and I faced the hardest job of all; we decided to take the old liner out of the pond and lay it out so that we could clean it more thoroughly. We needed every ounce of strength to drag the liner out and across the grass to an open space where we could lay it out. There was still sediment on the upper side, and mud clung to the underside - it weighed a ton!
Our hope was that if it rained the upper side of the liner would get a good wash.
We were interested to see that water was already pooling in the open pond, and it soon became clear that the top soil of the garden was laid over a solid seam of clay.
We then began a new task. We had decided to make the pond a little smaller by creating two new banks. Our work would result in reducing the size of the pond from being an irregular 6m diameter circle, to being 6m in one axis, and 5m in the other.
We started on the far bank, placing first rocks and then soil to build a new bank. You can just make out, in the photo above, the new soil (and rocks) which we put in place along an eight or nine foot segment along the far side of the pond. This was another back-breaking task which ended the third day's work.

Posted by Fr Richard Aladics at 06:18