Here in the presbytery garden at St Ignatius' there is a wonderful pond, which was created by one of my predecessors twenty five years ago. Last year, 2015, the pond was so over-grown that I even launched an inflatable into it so that I could do some weeding. 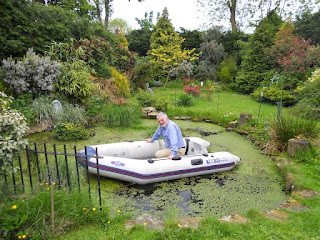 I also suspected that the pond liner was leaking. The question then was, should I attempt a small clearing up job, or should I replace the liner.
The pond is an irregular circle with a diameter of 6 meters, so emptying the pond and replacing the liner would not be an insignificant task. This is what I decided to do.
With the help of Rob, from the parish, the two of us began this huge work of renovation on 14th October 2015. We pumped some of the water out of the pond so that we could catch the fish. I should say, at this point, that there had been nine good-sized goldfish and one large dark fish in the pond. We retrieved only five goldfish - the herons had taken the rest. The pond is also full of frogs and common newts.
This is how the pond looked after our first day of work: 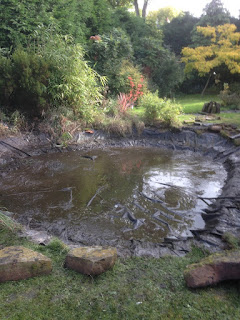 By the time we started work on the pond the newts had already migrated into the garden to overwinter; many of the frogs on the other hand, made their own escape out of the pond as we worked, others tried to conceal themselves in the deep mud, hoping that we hadn't seen them.
Having pumped much of the water out, we discovered that there was about 16 inches of sludge and sediment right across the bottom of the pond. No wonder the weeds were so prolific! We would have to remove all of this by hand. It suddenly became became clear to us the size of the job which we had undertaken.
To be continued.
Posted by Fr Richard Aladics at 06:24

Certainly was alot of work just clearing the pond out. Cleaning the old pond liner was hard but not as hard as getting it out of the pond.

Certainly was alot of work just clearing the pond out. Cleaning the old pond liner was hard but not as hard as getting it out of the pond.