It was the following Tuesday, 20th October 2015, when Rob and I re-convened. I should say that each day we worked on this project, we spent up to three hours working together - between five and a half and six man-hours. 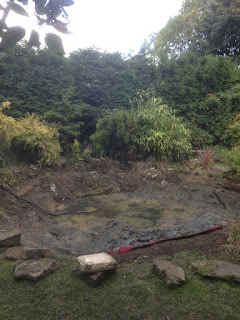 By the end of Tuesday 20th the two new banks were built up. You can see in the above photo a length of red carpet which we used to maintain the bank on the near side. You can also see a length of black hose leading into the empty pond cavity. This would stay in that place under the new liner and act as a release conduit for water accumulating under the liner.
We hoped that by replacing the old liner, which had indeed been leaking, we could cure the build-up of so much water under the liner.
The old liner had been rained on a few times over the weekend and, together with some scrubbing down from Rob and I, was now more or less clear of sediment on its upper side.
Posted by Fr Richard Aladics at 06:26